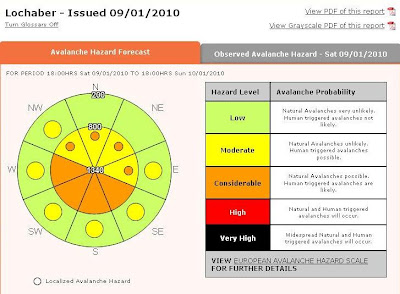 Reports such as the above showing circles or areas of "considerable" risk within a moderate NW to E is the sort of thing that it's easy to become complacment about as its a common feature of the Scottish winter. You might very obviously if you have any sense stay well clear of the West to South East apsects but wander into a high risk situation on descent on the NW to East aspects.  The majority of avalanche incidents in Europe occur in these moderate to considerable forecast days as they occur most frequently and folk become complacent (the familiarity heuristic) and that's why route choice approaching a climb and thinking about descent options prior to leaving and during a trip as wind and weather change should become part of your thinking.
at Thursday, February 07, 2013