A Lucky Escape From The White Room

A car was parked on the side of Monarch Pass. The driver watched a skier cut into "Gun Shot Cut Bank", trigger a soft slab avalanche, get caught and get buried. The driver grabbed a shovel and jumped out of his car and ran over to the debris pile. There was a ski pole sticking out of the debris and the driver went to that and dug the skier out. No injuries were reported. Initial reports have the skier buried about 3 feet deep. So, next time you're rollin' a doob on whatever mountain pass you travel on, make sure to keep your eye on the BC skiers around you. You could be the next everyday hero

Pass the Brufen? Perhaps Not!

by Bob Albright, D.O.
I wished to add a few more warnings on the potential downsides of NSAIDs as they pertain to training. NSAIDs work by interrupting the production and action of prostaglandins. Prostaglandins cause inflammation, pain and increased blood flow via dilation of blood vessels. These effects are “bad” in many circumstances but “good” in others. Nobody wants pain and swelling, and NSAIDs are very effective from this perspective. Many athletes have used these agents with impunity for years. But…
Our bodies need prostaglandins to overcome the vasoconstriction which accompanies stress to specific organ beds. Your kidneys will suffer decreased flow and may even fail when you add dehydration and low blood pressure to NSAID use.
NSAIDs will also lead to decreased blood flow to the stomach and bowel -- impairing digestion, and long-term, predispose you to gastric ulcers. This effect is due to reduced perfusion lowering the production of the protective mucous layer in the stomach. The often-described bloating experienced by most of us is exacerbated by these agents as well due to less blood flow available for digestion.
Dangerously high potassium levels (hyperkalemia), and dangerously low sodium levels (hyponatremia) are also often direct results of NSAID. This is due to the interruption of complex feedback loops, often with disastrous results.
Finally, NSAIDs have been shown to increase healing time, impair tendon healing, delay muscle rebuilding and may lead to bleeding tendencies. So, think about whether acetaminophen (Tylenol brand name) might be a better strategy when you are in pain.
Your non-beating organs thank you.
Larry Creswell, M.D., is a cardiac surgeon and Associate Professor of Surgery at the University of Mississippi Medical Center in Jackson, Mississippi. In addition to his regular column on Endurance Corner, he maintains the Athlete's Heart blog to offer information about athletes and heart disease in an informal way and to encourage exchange and discussion that will help athletes build a heart-healthier lifestyle. You can contact him at lcreswell@surgery.umsmed.edu.
Bob Albright, D.O., is a Nephrologist and Assistant Professor of Medicine at the Mayo Clinic in Rochester, Minn. You can contact him at albright.robert@mayo.edu.
at Friday, February 25, 2011 No comments:

Yesterdays pit profile and forecast for today from Paul Moores SAIS. Strong East wind today (15th Feb) and lots of snow movement ontoWest to NE facing aspects. This wind driven slab on top of some hail and also a very soft snowpack giving easy shears, will make things very dodgy. While the ski areas have shut the risky slopes, there remains a substantial risk for climbers walking into trouble on desecent, or mad enough to venture into a gully. Lagangarbh Corrie looked a bit dodgy looking up. Any eejit who says it's safe after an intitial release is talking shite. Hangfire from other aspects, or a second release over time from wind build up is always a hazard and in particular on popular decent routes folk going up can get taken out by folk triggering a release from above. Plenty of places this applies to. 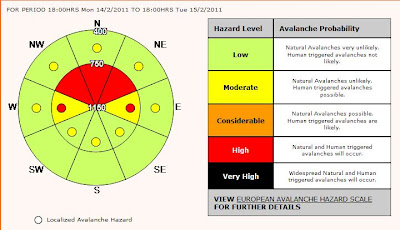 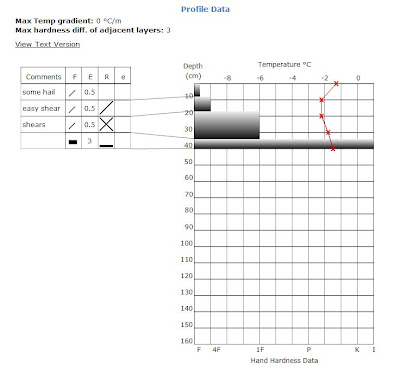 Went for a ski at Glencoe today. Strong winds and drifting snow had significanly raised the avalanche risk and visibilty was at times very poor.  I met the SAIS observer Paul Moores with Pete Weir doing a profile at the top of the spring run and they commented that there had been some small  slides triggered by Keith, one of the ski patrol. I had a few runs down as this was the best skiing although some sastrugi and wind ridges.  On my 4th run I trigged a fairly big slab but the runout is shallow at that point so these dont often pick up enough speed to take you out. However, I didnt like the traverse out to the top ski tows as it was hanging and as I was on my own so I went lower ending up above the lower Rannoch glades.  I stopped and just fell over in the whiteout and it whumped cracking accross above me for 50 or so feet and at 2 to 3 feet deep.  It didn't pop thankfully, but on skiing down below I could see that over the apex there was a 12 inch crown and debris. I was pretty wary after that but  I had a run down the Spring run a couple of hours later with Keith and Christine to look at a large slide out the bottom of the Spring run they had triggered.  I skied ahead and in a whiteout accidently cut too high out to the skiers left on a steep NE aspect and triggered a slide that took me out completely and took me down like a rocket covering me totally at one point before spitting me out 150 feet lower down on a patch of ice. Keith couldnt see me, but heard it whump and me shout so they skied accross and down to me. I got a bit of a fright to be honest!
I consider myself fairly cautious but nearly getting it twice in one afternoon is maybe my being over familiar with my local patch which to be honest has loads of little slope aspects that pop but you just get used to it.  A Heuristic trap?

Thanks to Mike Pescod who caught this unique piece of footage
at Saturday, February 05, 2011 No comments:

Well folks this combo of storm winds and heavy snow is sure cross loading the slopes so cool your jets for a considerable time to come as it's really dodgy out there.  When it improves be sure to have the transceiver, shovel and probe with you.  On that very subject I have a BCA Tour shovel and probe combo for £65 as a sale item and its not too late to get a deal on a Tracker 1 or 2 with up to 20% of RRP.

ACL Injury - How to Avoid It

• Uphill arm is back

• Skier is off-balance to the rear

• Hips are below the knees

• Weight on the inside edge of downhill ski tail