Out of action for the foreseeable future due to what could be a prolapsed disc or what used to be called a "slipped disc"  leg weakness and terrific hot pain down into my knee so lots of analgesia and no sleep but plenty of time to look at forums and think about the weather, especially as the house is moving in the wind which must be gusting 80 mph +. MRI scan to come at some point, but not much other than put up with it seems to be the way.  Here's todays Tramadol fueled musings on risky behaviour and groups.

Two separate avalanche incidents in the Cairngorms at the weekend, thankfully with no loss of life but lower limb fractures (ouch!) and quite a bit of forum chat on transceivers, snow pits, safe travel and some mention of "Heuristic Traps" Link to Ian McCammons excellent article just click here. A very good read. My only comment is that as a term it's getting a bit hackneyed as its thrown at everything where a (questionable?) decision is made in avalanche terrain. An aid to learning or discovery, heuristic methods are about trial and error problem solving, relying on lateral thinking, applying common sense and learning from experience. It's way too simplistic to apply 20:20 hindsight to an avalanche event and apply one of MacCammons common traps as a cause when its a bit more complicated.  I am often at staff meetings at work or discussions where the comment "oh a classic heuristic" is made during a discussion when say someone has been reported as being avalanched off a slope they know well.  We should enhance our foresight so we don't get into a position of risk or danger and apply this as the heuristic process before the event. Everything seems obvious in hindsight - because it is.  it's just not so obvious when in real time.

One of the crucial aspects of this foresight is how we act in groups.  In psychology "Groupthink" or "Risky Shift" behaviour is well known in groups and most of us will be aware that we have given in to it or even encouraged it. I strongly believe that in avalanche incidents in Scotland this group think or risky shift has become the biggest education issue and maybe why we see large group incidents or group events as occur ed in the Cairngorms on Saturday when two separate groups were avalanched. Much has been made of the quick response from folk training in the corrie who helped.  And good on them. What I am about to say is not a reflection on these helper folks choices, as I am sure they stayed in safe terrain.  The  "however" bit though is that just by being there and numbers increase with lots of MRT's training, and groups under instruction, then a larger "Group think" takes place. Groups less experienced or not under instruction maybe feel safe, what McCammon labels  as Social Facilitation.  I would call this a  "risky shift" .  It's often this way in the climbing and skiing honey pots such as the Northern Corries where folk gather. Aonach Mor or ScRL in Glencoe are other places.  Even if the waggon wheel of death shows Red on these slope aspects, they are still the places to be seen by the instructor masses who are now at the height of their annual gatherings with paying students. These are the places instructors are familiar with, and therefore where less experienced folk feel safer with an apparent safety in numbers. They maybe went their when they were on a course as well. Group thinking on a large scale perhaps.

Better minds than mine have already written about risky shift and here's an excellent article on it The Risky Shift Phenomenon and Avalanches. This kind of stuff has been getting applied to avalanche instructor training for a while by AAA.  Do current winter mountain training schemes  include enough if anything on this sort of thing?  I put this as a question, as I am certainly not in a position to know, and maybe it is already covered. What I do know is that there is nothing that can change the pretty piss poor odds if buried and that pretty universally all of us involved in avalanche education are trying to jump forward and get to "no rescue".

No matter what we do, mountains and people are unpredictable.  As a a keen off the piste skier I have to accept that luck is also in there as well, as on good snow days I am first in the que and having gone through the forecasts, stability tests you are only left with how the snow feels under you ski's and gut instincts. Sometimes it's a very subtle thing where in the morning it feels wrong, and by afternoon the snow "feels" safe.  I don't know how the feck that would stand up in court! I also know its taken 40 years and I still can't always be sure it all won't go tits up one day. I also know that it pays to voice your opinion when in a group, and make your own choice, not getting swept along by the group and it's most vocal leader. Beware Risky Shift! 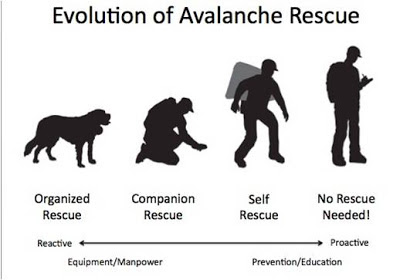 "Destiny is a good thing to accept when it's going your way. When it isn't, don't call it destiny; call it injustice, treachery, or simple bad luck" Catch 22 by Joseph Heller.