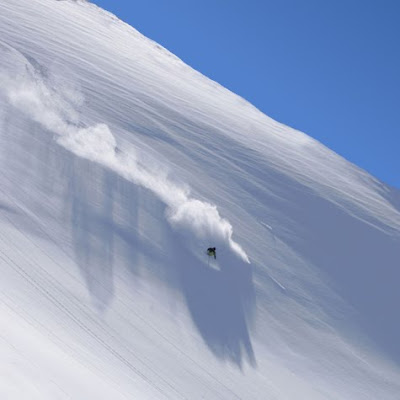 Will this avalanche? The stability test says no but the forecast says "considerable on some aspects". You have the run of your life. You might just have to accept that is what it might cost you.
at Sunday, February 28, 2010 No comments:

Avalanche on the Glades

Interesting skiing today in Glencoe. Big sastrugi off piste facing the East wind and big loading on the East side of the mountain.  Unfortunately two well known off pisters had a slide over on "Camasutra"(?) with a crown wall of about a meter and a long trip down for a few hundred feet, luckily on the surface. Both guys were very cold and one had a broken ankle. Tried to ski in but as you will see in the picture there was near thing, so decided it was safer to get a helicopter.  Skiing back to the car from the summit later was nice. 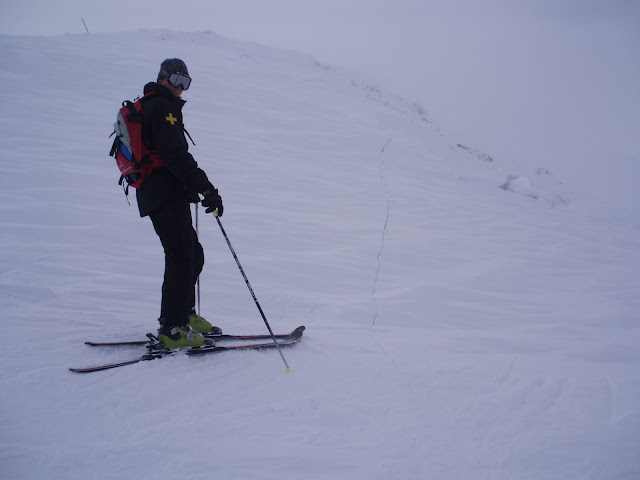 Rannald Bailley and the crack Glencoe Patrollers were on the wrong side of -  but quickly slid back over.  This propogated up the hill beyond what is visible and caused a big slide that went past the two original victims below.  Dense hard slab and very deep.   A near miss! 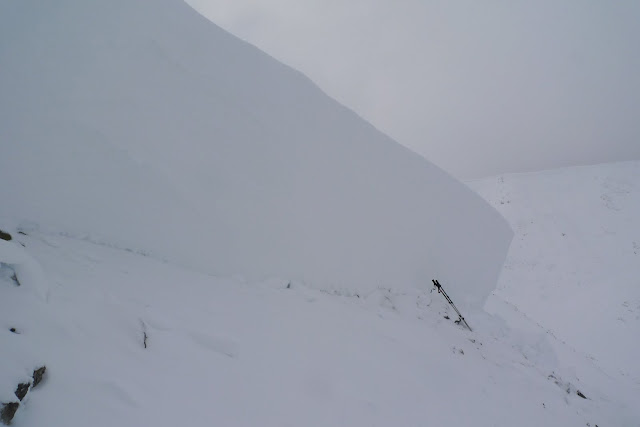 The crown wall from the Avlx the victims triggered. Ski sticks 120cm approx, so 1.5m Crown Wall.  It went accross the Cam Glen gulch and up the other side a bit.  Pretty Big! Good pic from Blair Fyffe SAIS Blog 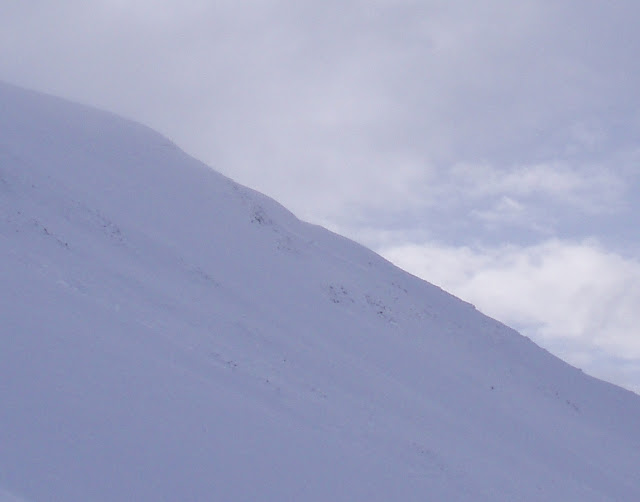 Middle picture just below the ridge you can see the crown wall
at Saturday, February 27, 2010 No comments: 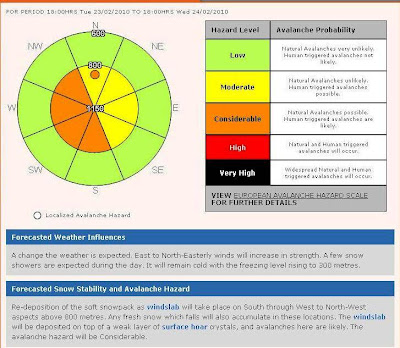 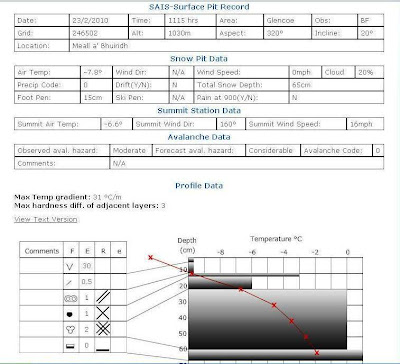 Wednesday/Thursdays Pit's Below showing the windblown grains on top of the Surface Hoar and Damaged crystals.  It's snowed heavily since this forcast went out so late Wednesday and the rest of the week off piste steep stuff on the marked aspects will be lethal. 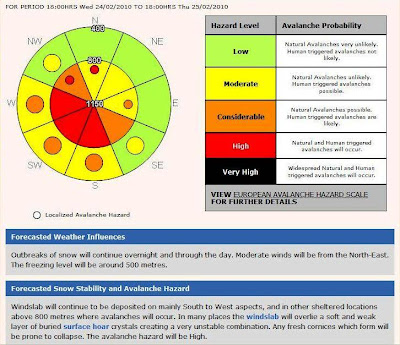 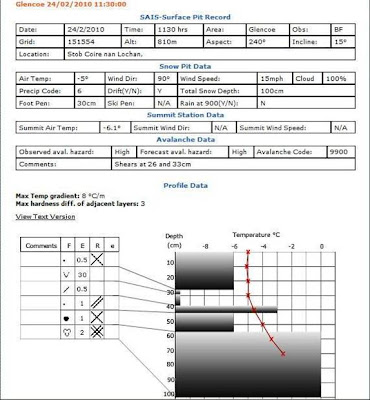 Another Avalanche Near Miss

What a winter. These pics by regular Glencoe off pister Bob Gatting fairly show just how popular the "Freeride" concept is becoming.  Fiona skied this face 25 years ago, and it is usually done once or twice a season.  Now it's common as are the Corrie Ba and Cam Glen itineries. A Back Country Transceiver Park couldnt be put in a better place. Great weather so shouldn't moan, but it would be nice to get another top up of fresh by the weeks end.  Fingers crossed. 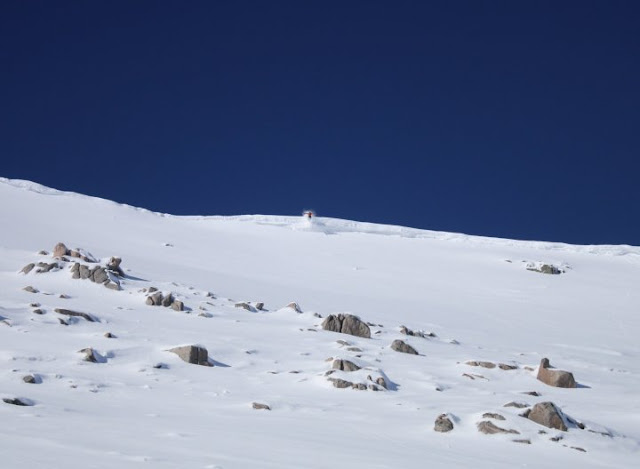 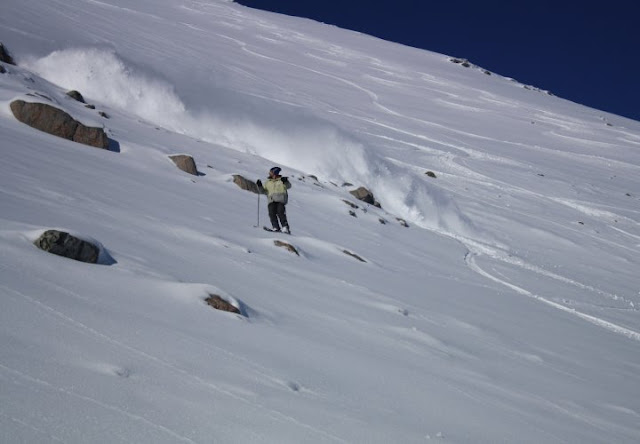 WTF? Glencoe Ski Club Member Nearly Gets Taken Out By an Avalanche 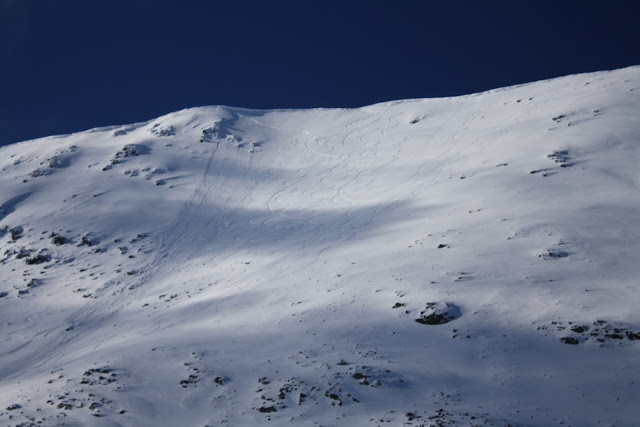 The crown below the scarp is visible top left 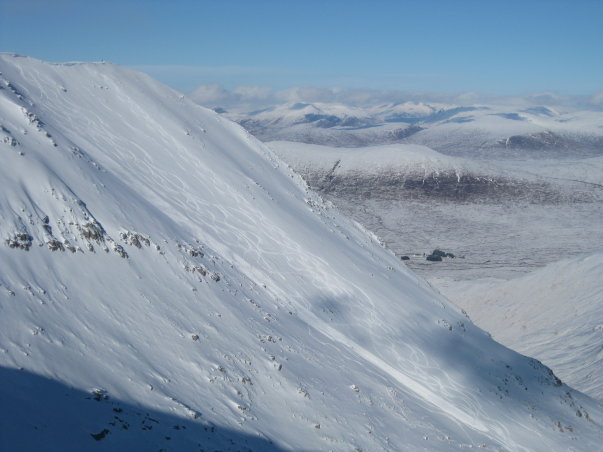 NW Aspect Nearly Skied Out
at Monday, February 22, 2010 No comments:

NACC ran an XC race at Fearnoch Forest today.  Glorious weather and a great 2.5km course with ice, snow and lots of up and downs.  As always these guys are a great laugh and it was good event.  Fiona was first lady and I was 3rd beaten into place the winner Nick Charlton and 2nd placed Mike Bossard. 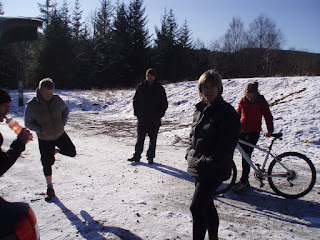 Sun and snow at Fearnoch 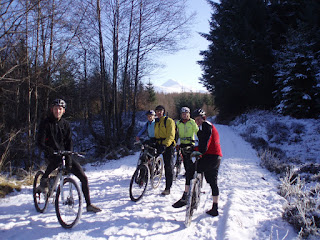 Some competitors with Ben Cruachan in the background 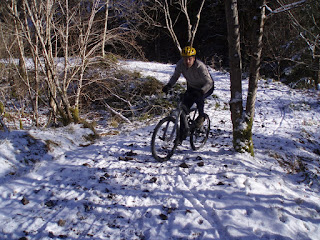 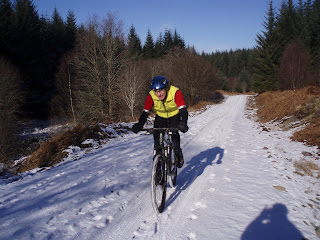 Tim Brand who was on my Tail but didn't get past 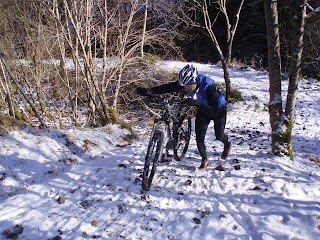 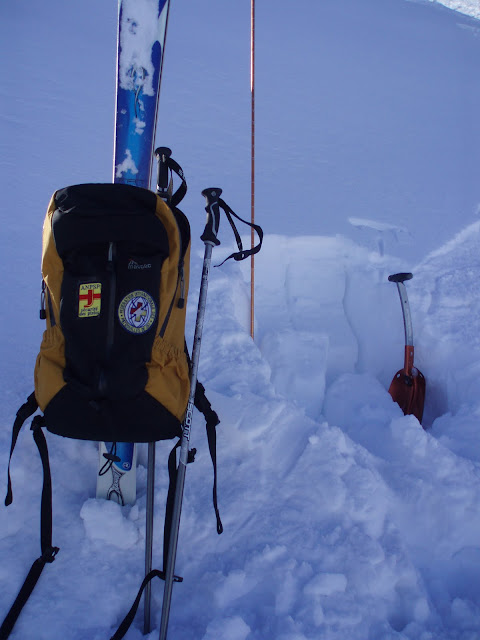 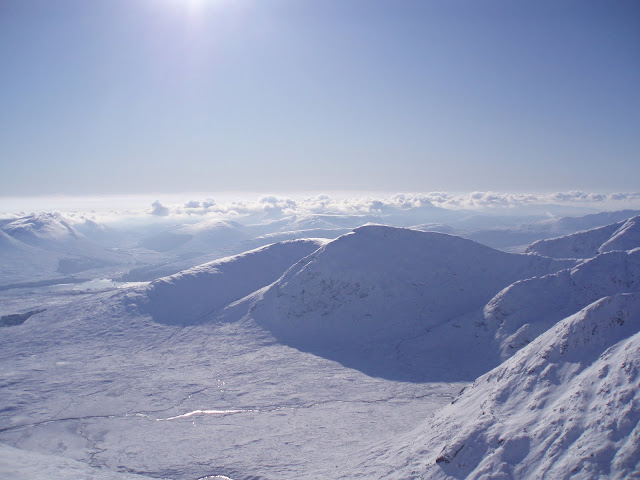 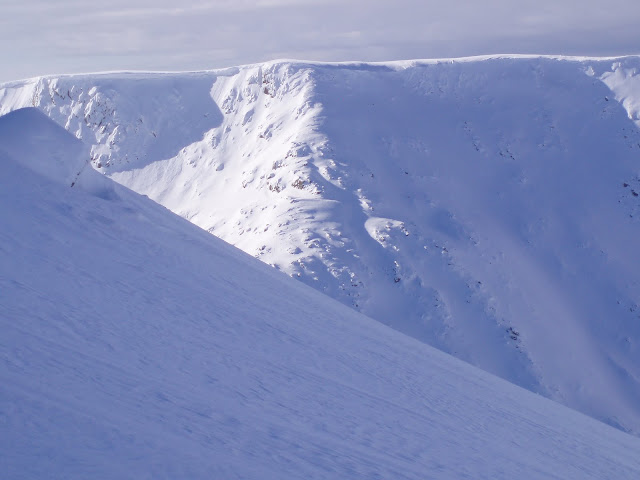 I forgot to add that I want fatter ski's. Some really fat bastard twin tips and big mountain long at 175. Just as well  "Movement" ski's are making a deal.
at Thursday, February 18, 2010 No comments:

http://www.etapecaledonia.co.uk/
86 miles on closed roads around Highland Perthshire. Can be ridden "sportive" style or road race where it's hot and gnarly. We want to race this partly in memory of our old climbing mucker Ed Grindley who sadly passed away today, as well as all those folk we know, or sadly now only new, who are touched by Cancer. 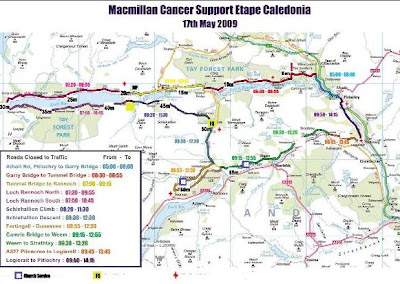 Getting back to bike time very soon.  Road bike and MTB with the spring like weather.  However, it's worth remembering why we ski:

A few shots of the skiing and a triggered slab with crown wall.  Transceivers, shovels and probes all on board as it's risk "consideable" to high avlx risk so we are avoiding N. Facing lee slopes at 38/48deg.  This crown was on a traverse out, and had a good run out with no terrain traps. 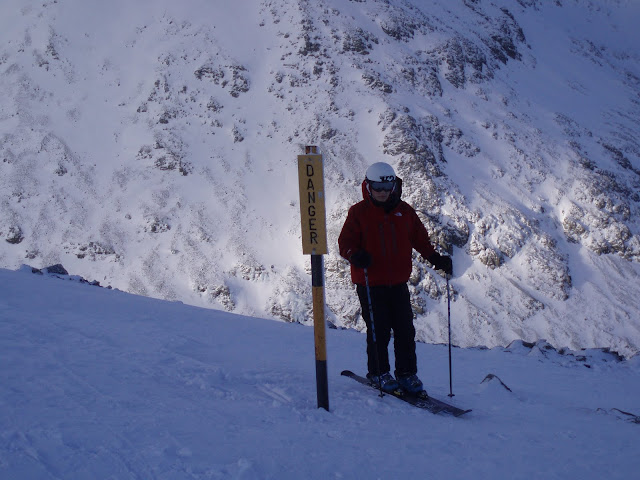 Duncan Gunn 17 and a cheeky skier on the steep & deep 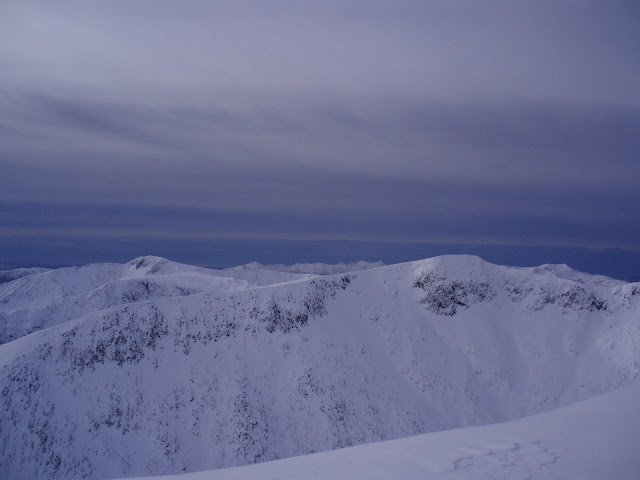 Heavy Snow on the way 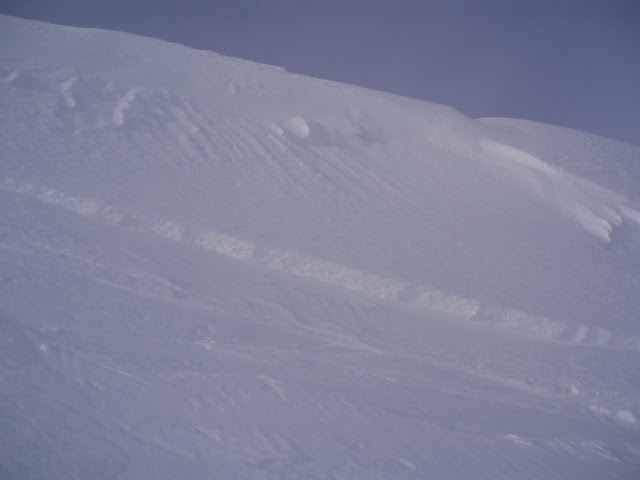 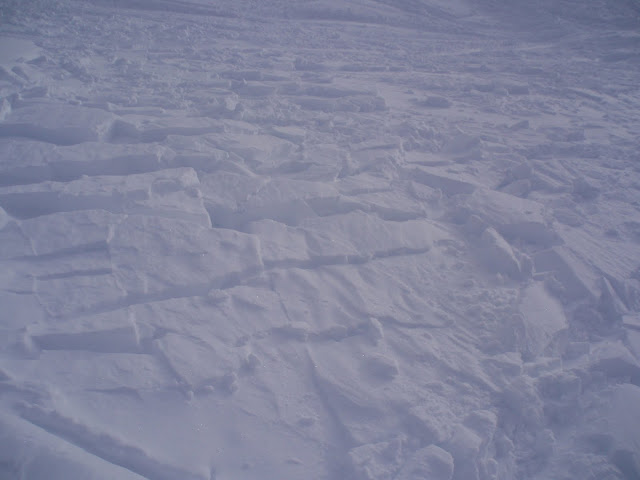 The stuff that can bury you if you don't practice safe travel
at Wednesday, February 03, 2010 No comments: