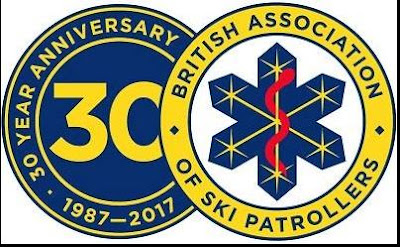 I can well remember my first introduction to BASP with Doctor Bob up at Glenmore Lodge in 1989 when the fledgling association was both finding its feet to represent Scottish ski patrols and also seeking a way to provide some off season income to patrollers from first aid training. For a number of weekends it was up the “planet lodge” for first aid training with RGIT and also instructor training.  Over the years the association has prospered with at one point nearly 200 associate members and also training thousands in first aid and emergency care.

Things have moved on since “Ernie” the training officer would go around the resorts giving the patrollers mountain skills training to a much more “in house” training by each resort. This is good, but we are apt to become a bit insular unless we also look out for training and cross fertilise by working with each other as each area has its unique challenges. This is personal development as a ski patroller.
Things wax and wane but I can’t help but notice that the AGM’s are maybe quieter and less well attended and maybe we are so “in house” oriented we have forgotten we are an association of likeminded souls with a common interest.  Back in the early days the AGM was to further the training and expertise of Scottish patrollers and encourage the personal development of associate members who may want to become voluntary patrollers or just support the association. I don’t think that has changed but if less folk make the effort then it’s a poorer event. Last season was a snow disaster, but so were the seasons for a decade following the formation of BASP. This is Scotland after all!  Despite all the hype and snowy pictures of the alps each season its no better for them if you work and play below 2,200m. So we have to be resilient and as upbeat as those who had the foresight and confidence to get BASP up and running. An association is only as strong as its members and you get back if you put in. So my plea is for folk to remain involved and be active in the association.

This year sees an anniversary for the association and a Grand Ball to celebrate what we all have in common. That is the love of skiing, the mountains in winter, our ski patrol friends from at home and abroad, and the privilege of helping others in trouble. Kate our chair is putting a lot of work into make this gathering a success. Make it easier for her by getting your shit together and making a commitment to this momentous occasion to celebrate the hard work done by those working in the background for all these years, and those that have seen the association through its tougher times. Make this years AGM your priority, have your say on the associations future and enjoy a great social.


So folks get your shit together and get over to the AGM and ball. It must be some event as Fiona has dug my kilt out!