Winter Season Round Up & Thank You 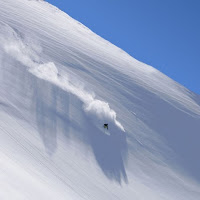 What a winter it's been for us.With taking on BCA and Dynafit to test the market for a winter product I had no idea how busy it was going to be. Many of the MR teams and ski patrols have bought T2's so this has kept me busy, and also the ski packs and safety products have been flying off the shelf.  With a cold clear early season and an interesting continental snowpack, ie shallow with lots of vapour transfer, then I guess it was no surprise that folk wised up that staying safe would require kit and training when it snowed. This was greatly helped by the BCA park on Glencoe Mountain.  Even recently when in the park observing a very experienced group under supervision from a guide, the need for training came through when a group member beacon auto reverted costing a wasted 20m on a false search. There is no substitute for training and getting glitches sorted in the park will save lives. Hopefully Nevis Range will have a BCA park in place for next season as we feel that the two best Scottish off piste areas should have one. Particularly pleasing in training is seeing users of the Pulse, S3 and Pieps DSP come to realise that BCA got it right on the T2 as it's much, much faster at processing and can narrow distance down to as little as  0.4 of a meter and that by using SP mode and the 3 circle or "DV" search method makes it just as usable in multi burials.

Mid season was mixed weather wise but the last dump in late March produced an epic week of skiing which we took full advantage of and it gave me the chance to shoot some HD off piste footage on my "GoPro Contour HD". Next up is a BCA festival hosted in Aviemore by UK importers Anatom and for distributors like CranKitup Gear. Next season we hope to have the BCA "Float" on sale for the UK market and will keep the Snowpulse online. The Snowpulse is expensive but this years stats in the Alps have shown the cost will save your life.  Many of the guides have adopted the remote trigger module as well.
With winter done it's across to the bikes now. Already things are busy with repairs and spares and forward bookings  right through to October.  We have 3 new trails added to the "off road gnarl" portfolio and can offer a good service to folk as we know bikes. We ride bikes, we fix bikes and we know what folk need.  Having 3 cycling children (now young adults) we also know what it takes to make a family cycle work.  Many of our customers come from local accommodation providers who clearly know how to look after folk staying with them. Glencoe Independant Hostel as an example often run folk down for a hire and go that extra mile often literally for customers needing advice on the hills or activities on their stay. Clachaig Hotel the SYHA in Glencoe are similar in having a customer orientated view going that extra bit to make a stay a good one.  I am also seeing much more custom from Appin and North Lorn providers. It's so pleasing to see that the outdoors and what we have locally in North Lorn is being promoted so well.  I am particularly fond of  Duror and Appin as a cycling area.  The roads are slightly quieter (North Shian), Lismore makes a great day trip and the cycle track has few hills. And of course there is great food at Stalker Restaurante. 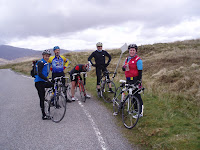 A big thanks to all of you who send me custom. I won't forget you and if you need something let me know.  Have a good season.
at Thursday, March 31, 2011 No comments:

Russian skier buried by a guy skiing in from above and cutting across. This slope had been skied but in the end it was a question of load and perhaps slow structural failure due to shear propogation.  The skier in the bottom left of the start has still not been found and the search has been called off. I have skied this area with family but in much safer conditions.

Things are getting out of hand hoarding spares, and bikes so it being Spring (ha,ha,ha snow in the garden) I am having a clearout:
Avid Juicy 3 Brake set complete.  With 180 front rotor and 160 rear and good pads fitted. Used but in good condtion £70
Shimano 105 5700 10 speed groupset 50/34 170mm crankset. Silver.  Used but in vgc RRP £450 but will sell for £300
Trek Equinox 9 TT/Triathlon bike ZR9000 frame. size 54cm with a fixed saddle height of 74cm centre to top. 53/39 front and 11/28 rear. Full Shimano Ultegra TT groupset on deep section bontager hoops and DT swiss hubs. Comes with a "Cobb" handmade saddle with body geometary cutout. Saddle alone worth £150.
£890
Focus Killer Bee XC Race version with Alex rims, XT groupset, Rockshock Recon 100mm travel air front shock with lockout 6061 Frame.  Very nimble and fast - unlike the owner.  £600
at Sunday, March 13, 2011 No comments:

Glencoe Mountain ski area.  World famous and frequented by the stars who pop by occasionally.

007 may have an Aston Martin DB6 but Hamish has a 944.  Hamish's co-pilot for today's mission was Phillip Rankin WW2 Mosquito Reconnaissance pilot and veteran of being shot down and surviving a dunk in the channel. They do not make them like that anymore!
Lovely afternoon up at Glencoe Mountain hosted by Andy Meldrum and Glencoe Mountain to celebrate 60 years since the idea of a ski area was floated by Phillip Rankin, and 56 years since the first lifts went in.

It was so nice to catch up with the folks who made all this possible, and to see Phillip honoured in this way. He may be 95 years old but he's as sharp as anything and gave a truly great and very humorous speech in which he acknowledged the pivotal part played by the first ski patroller's, and their ingenuity in acquiring parts of Clyde shipping to make Glencoe run.
All in a great afternoon and nice to meet up with folks who new me as a spotty youth skiing way too fast. It was lovely that this was a small private affair and a privilege to have been invited along. What shines through is that this is a ski area held in great esteem and much loved, and will always be unique as Scotland's premier ski area for true mountain loving people.