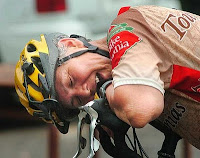 
Cycling Economy: The last of the big three physiological fitness determiners is economy. Sport science understands less about this one than the other two, but it may be the most important. It has to do with how efficiently you use oxygen while exercising. Measuring oxygen used is just another way of measuring energy during exercise since in the human body how much oxygen you use also tells you how much energy you’re expending. Your economy is much like the economy rating for a car. – how many miles per gallon of gas. Only in the case of exercise it’s how many milliliters of oxygen per mile.
The longer the race is the less important aerobic capacity becomes and the more important economy is. This is because at the longer distances you exercise at a lower percentage of your aerobic capacity. So having a big VO2max won’t be of great benefit. But wasting even a little energy per stroke or stride due to poor economy will add up to a lot of wasted energy – and a slow performance – in a long race.
We know what can be done to boost your aerobic capacity. You can do lots of miles and mix in high-intensity intervals. Economy is a bit different. There are some things you have control over, but many you can do nothing about. For example, we know that for swimming being tall with long arms and legs and big feet improves economy. Unfortunately, you can’t change those. In the same way, for cycling having a long femur bone relative to your total leg length improves economy. For running being short and small are good for your economy. As an endurance athlete economy is improved by having a greater percentage of slow twitch muscle fibers. And there are other improvements to our physiology we would also make if we had control over them such as increasing the number of mitochondria we have (these are the little powerhouses in the muscle cell that produce energy). These are all things we have little or no control over.
So what things can you control to improve your racing efficiency and use fewer milliliters of oxygen per mile? The most common technique. You must realize that if you decide to go this route and make changes to your current technique that there will be a period of time during which you become less efficient. This will show up as a higher than normal heart rate at any given speed or power. And it may take weeks if not months to make the new technique your normal. At that point you should be faster at the same heart rates as before.
Others that are beneficial for the bike and run are reducing excess body weight and using lighter equipment. Then there are sport-specific efficiency improvers. The most notable is aerobars on the TT or tri bike along with other aerodynamic equipment such as wheels, helmet and bike frame. As a swimmer you can improve economy by improving the flexibility of your shoulders and feet, especially the ability to point your toes. Interestingly, the research shows that having less flexibility in the ankle joint makes for more economical running as this appears to improve the release of energy stored in your calf muscle with each footstrike.
Training components that improve economy are intensity and frequency. Training at a high speed or power has been shown to make athletes more economical at all speed and power outputs including the lower range. But it doesn’t work both ways. Going very slowly doesn’t pay off with greater economy at the high end of speed and power.
One of the best ways to improve your technique and therefore your efficiency is to do your sport frequently even if each session is very brief. For example, for a triathlete to become a more efficient swimmer with only two hours a week to devote to it, swim four times a week for 30 minutes each time. That will improve your efficiency sooner than doing two, one-hour swims each week.
Plyometric exercises have also been shown to improve economy in both runners and cyclists. This involves doing explosive jumping, bounding and hopping drills. For the run brief, powerful hill repeats are much like plyometrics.
There is still a great deal of debate about whether or not traditional strength training with weights improves economy. I believe it does as I have seen so many of the athletes I’ve coached over the years improve their performances remarkably after a winter of lifting weights – provided they did exercises which closely mimic the movements of the sport. Doing curls is unlikely to make you a better runner. But doing step ups may help.
In summarizing the three physiological fitness determiners remember that aerobic capacity is largely the result of your genetics as optimized by steady training over many years. And the longer your race is the less significant this is to performance, even though it wouldn’t hurt to have a high VO2max. Lactate threshold is highly trainable and you should see a steady improvement in your speed or power when you reach this threshold. Economy may be the best determiner of performance of the three. But, as mentioned, we don’t know a whole lot about it and much of what is known to be important is out of your control. The things you do have some measure of control over often take a long time to accomplish (e.g., changing your technique), are difficult to achieve (e.g., lower body weight) or are expensive (e.g., lighter bike). 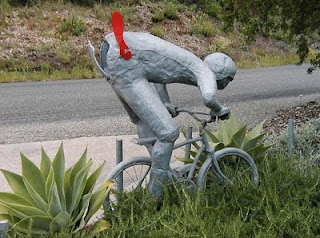