We arrived at Pitlochry late Saturday afternoon to register for the Etape. From the outset it was apparent that this event is in a league of its own. Company stands from some top names such as the Sky/Adidas cycling team and a free service centre from Mavic with a nice jazz band playing in the lazy afternoon sun made for a carnival atmosphere. The slick system and really warm reception at registration was really nice and the hundreds of locals and business’s were all welcoming. £16 worth of Freebies from Zipvit helped allay some of the energy worries for next day. Considering the 4,500 folk in the event that is quite a commitment from Zipvit as well as them stocking all the feed stations with heaps of gels and energy food.


Accommodation was booked out for most of Perthshire so we chose to camp. Along with a few hundred others, some of whom had a family support team and had been there for a few days cycling. Pre event nerves kicked in and sleeping was never going to be easy or refreshing. At 3am folk were already up and about for the 7am start. We had our breakfast, lubed the bit’s that might get sore then cycled the 2.5km’s into the town which was sealed off to cars. For us I guess it’s the nearest we will ever get to the atmosphere of a Grand Tour. Yellow Mavic service cars ready to go out on the course, Several TV crews, John Swinney the second minister working the crowd, Graham O’Bree speaking to folk, teams of serious folk warming up at the front and yet hundreds of folk just wanting to get round in one piece further back, and a great chatter and exuberance of nerves and excitement. I was away with the “A” group where I felt a bit out-classed by youth and vigour and Fiona was not far behind with at 8mins after seven am for her group. To say I was prepared for the race would be wrong. The Bealach Beag last Saturday then a rest on Sunday, Easy ride Monday then I lost it on the Tuesday night 25 TT. Cold, ill and unwell feeling I nearly didn’t finish. Wed I had as rest but a moderate temp ride on Thursday I still felt unrecovered so I had a very easy ride on Friday knowing Sat was a rest day. I didn’t feel well on Saturday so wasn’t sure how Sunday was going to go. I wanted to get about 3hrs 50. 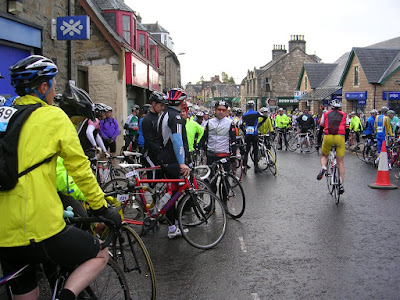 Riders Waiting to Start (click once for large - twice for full screen)
The start for the front group going through the town was chilled, but as soon as the big road was reached the hammer went down and it was 30 mph in a big bunch and lots of acceleration with concentration to keep a wheel. The first 40 miles are a bit of a blur and were quite lumpy into the wind, but the road surface was really good for a B class road. Very quickly after going back along on the South side of Loch Rannoch it was the “King of the Mountains” timed ascent of the 5 mile 1500ft to the top of the pass over Schechallion. While not as steep as the Bealach na Ba its still full on, with sections at 16%. The descent of 5 miles down the other side was on a good road surface with nice bends and really, really fast. No shimmy on the bike as I had changed the frame so I could let rip. A sharp turn West at the bottom then a nice run up Glen Lyon up one side then down the other then onto a wide smooth road past Castle Menzies at a steady 35/28mph in the bunch until Logerait where there was a sharp turn up and left straight onto a 18% climb. This clearly broke some folk judging by clattering of gears and wheezing! I had not stopped at any feedsations due to speed and had run out of gels so getting under 4 hours wasn’t going to happen. I could feel the need for more and my threshold was going down which showed in a speed and heart rate drop which I don’t get at this time or distance if I keep the calories coming. Then the home run of 5 miles into Pitlochry. This had a few short sharp hills but was quickly over and then the public lined hill up into the finish in the town and cheers and clapping from hundreds if not thousands of folk. The public address system blares out who you are, and where you’re from. A quite pretty girl comes over and hangs a medal over you head and a not so pretty guy gives you water and helps you to a filter area. And it’s over. 3,500 k/cal, 81 miles and 3,000+ ft of going uphill. Within 5 mins your time is texted to your mobile and throughout the event folk could follow your split time live on the website. 4hrs 6 for me and I thought I would have a couple of hours to wait for Fiona who was going to stop at all the feed stations and rest and take pictures. Blow me if she doesn’t come in only and hour and a bit later at 5hrs 03 and as one of the fastest Vet ladies. With pain and surgery looming for her to say that I was very proud of her courage and stamina would be a considerable understatement. 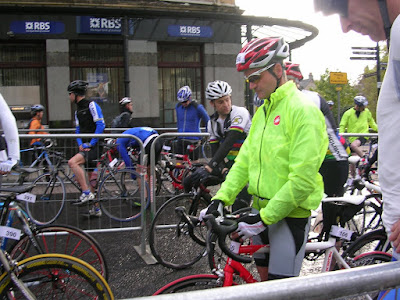 Me Looking Nervous behind a top Rider (click once for large - twice for full screen)
So, that was Etape Caledonia. Fiona’s condition will be sorted by surgery all be it major, and my suffering riding with stronger folk ended in Pitlochry. What is truly humbling is the amount of money raised for Macmillan and the support of the people of Perthshire for those whose fear and suffering has no finishing line and to whom this race is dedicated. 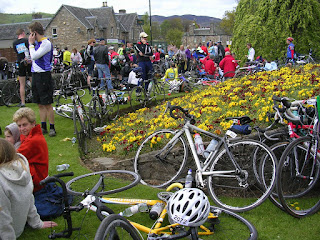