Are You Really Ready For Winter?

It’s that time of year again. We anticipate winter and its many false starts before we finally get going on the skins, ice tools or uplift. Backcountry/Sidecountry skiing has grown its market share as folk want to earn their turns or be away exploring. Uplift and ski resorts are the slingshot getting folks high and fast before skinning away to summits or dropping into bowls or gullies. Some stay ski area inbound and some folk go outbound.  A lot of the “sidecountry” skiers are just resort skiers who may have aquired few mountain skills and perhaps not be “searchable” (Recco Strip or Beacon). Serious backcountry tourers tend to be mountaineers, be more avalanche aware, and will more likely have the essential three items of shovel, probe, and avalanche beacon, and so be searchable and rescue capable. No matter how you play it, more and more folk are exploring all aspects of the ski areas, not just frontside. With that comes the inevitable consequence of the aspect, angle and precipitation posing a risk to the less mountain aware, less experienced folks who are not avalanche aware and so perhaps more incidents, be it near misses or unfortunately sad events.

Now is the time to dig out the search tools. Check your avy beacon, fit new batteries and get familiar with it again (use three antenna beacons only – bin the two antenna or old analog). Even consider upgrading older three antenna ones that have had daily seasonal use for more than five years. If you upgrade don’t go too fancy. You can’t go wrong with something like the Ortovox 3+.  Avalanche beacons like all technology evolve. In the last year some of the new beacons coming on the market have much faster signal acquisition and processing. Newer models have much better signal separation, GPS to keep you going forward and the “flag/mark” feature is much more reliable if it’s a multiple burial. This makes locating multiple victims easier. But they still need dug out, and unless you have many hands with shovels then you may be better excavating the first one found fast rather than all of them slow. Personally, my take is that unless you have more than four folk with shovels on the surface don’t spread your resources until you have the first located victims face exposed, some of the chest clear and started resuscitation. Some research has shown that airway management with ventilation and if possible, chest compressions should begin immediately, even when the victim is still partially buried. See link to Scandinavian Journal of Trauma Resuscitation and Emergency Medicine paper below. 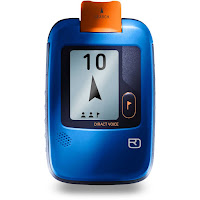 New avalanche beacons such as the Ortovox “Diract” are now coming with useful features such as voice prompts, re chargeable Li Ion batteries, hardware checking via a phone app and via the app software updates to future proof them. The curse of the “auto revert” from an inactive rescuer during training or the real deal is now a standby mode prompt when you go back from search to transmit, or if searching when a light sensor on the display gets covered it puts the beacon back to transmit.

Its sensible to have a longer probe if you can fit it in your pack. Most ski specific day rucksack sleeves only take a 240cm probe although touring rucksacks are bigger. I find a 280cm carbon probe in my day sack a good compromise. MRT and Ski Patrol should have some 3m+ probes for when the companion rescue phase is taken over by rescuers. It used to be assumed that folk buried deeper than the 240cm had a poorer chance of survival. In fact, it’s only poor as it depends how fast they are dug out and generally with less people and fatigue that remains partially true. Ski patrol, mountain rescue should be able to have lots of diggers available. With strategic digging method and enough rescuers folks are now getting dug out alive from 4m+. 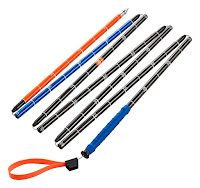 Avalanche rescue is also a logistics issue requiring delegation and leadership as well as regular training and skills practice. Realistic scenarios get teams or groups working together and well drilled. If the victim has no beacon transmitting, or Recco reflectors then its avalanche dogs early on scene, or probe searching, the slowest of all methods to find them.  Probing requires more rescuers and good line discipline. Initially it may be members of the public co-opted (if deemed safe) spot probing while rescuers carry out beacon and Recco sweeps. MRT and SARDA should be on the way ASAP. Survival is best with the “all in” approach where every search method is called in and deployed as soon as possible. Formal probe lines are like herding cats. Fail to practice this and you plan to fail. It’s a neglected area which is why rescuers need to practice.

It remains that the most effective airway opening device is a good shovel in the hands of someone who’s not work shy. A memorable example was local builder Brian MacDermott a member of Lochaber Mountain Rescue who I witnessed shift more snow in a short space of time than 4 other rescuers in a multiple victim event in the Great Gully of Buachaille Etive. We normal folk can achieve similar as a group by employing a conveyor and using a more strategic organised approach to digging. The tool needs to be an alu shovel with a wide blade and extendable handle such as the Ortovox Pro Alu III. It’s also useful if it can convert to a hoe as sometimes those in a conveyor are better to be pulling the snow away from the front digger. 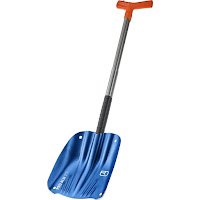 While we wait for the snow to arrive there is plenty for us to train and probably not enough time to do it all. But it can be a sociable time and a good mental preparation for a season that’s not just going to be unpredictable for its weather, but also from a snow hungry public with time to make up and perhaps less risk averse in doing do. The pieces to be picked up by rescuers.