Please note these are the blog authors take on the findings, proposals and often hypothetical conclusions of some research papers from ISSW 2014. These are scientific presentations, and while often dry, more often as not drive the best practise we then follow as rescuers. The presenters are the best there is, so it’s worth taking heed. These are just snippets as the papers are quite detailed so I have tried to take out the pertinent bits.

Abstract “We review the environmental and physiological factors contributing to survival during prolonged burial and emphasise that rescuers must operate urgently until victims are recovered and physically examined.  We then examine the role and frequency of “small team rescuers”: rescuers who are neither part of the involved party nor professionals but play integral roles. We propose a holistic systems based approach to avalanche rescue that incorporates individual small team and professional segments in a non linear collaborative model”

Some stuff to follow up on such as Gibert and Oberfarmers papers from 2008 where some victims of profound hypothermia and prolonged resuscitation made a full neurologic recovery. Also accidents with fully buried victims but no fatalities often go unreported and are under represented in the statistics likely producing a bias towards poor survival for given burial durations (Haegli et al 2011) 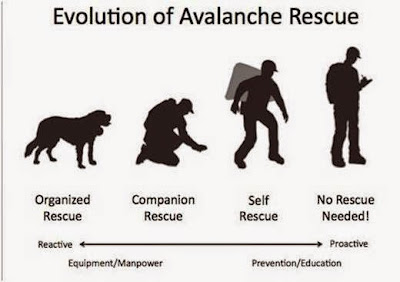 The paper uses a case study of a 2014 multi victim burial in the Sawtooth region of Idaho where 3 of 4 fully buried victims survived prolonged burials. Heads were buried at an average depth of 30cm. Two self recovered after 45 and 60 mins and the third was recovered by two other snowmobilers after they had made it to the trail head, got a lift to a café and got the impromptu rescuers back to the scene on their sled recovering the victim at 105 mins since burial.

The above survivors reported a crushing sensation on their chests and were initially unable to breath but overtime managed some wiggle space. Their airways were not packed by snow. The authors hypothesise that the burial environment in the upper 30-50cm of debris may differ significantly from deeper portions of the debris in some avalanches, resulting in delayed onset of asphyxia and increased probability of surviving. Hard slab avalanches being less dense offer pore space and air channels between blocks and free air from the surface getting rid of CO2 by diffusion and effusion.

Some conclusions: “A buried person who is alive at 35mins has a relatively stable chance of being alive at 60. Experience shows that rescuers searching the scene beyond 30mins show a slowing of speed and intensity assuming its becoming a body recovery. The authors conclude that victims are alive until proven otherwise and that avalanche rescue would be well served to follow a holistic systems based approach that applies multiple strategies and tactics integrating individual, small team and professional segments in a non linear collaborative model.  Avalanche educators should include information and training on how companions, small teams and professionals should interact with each other.

Bloggers conclusion: Companion rescue and thorough beacon and surface search while simultaneously getting professionals called and accessing other skiers or climbers to help search and poke holes,  Dogs and Recco should always be mobilised as an avalanche is a medical emergency and all means to aid recovery utilised. Non linear is the posh way of saying get everyone who can to go help at the scene, and "collaborative" is not turning it into a pissing competition of MRT vs Ski Patrol or everyone vs SARDA.  Use all means, no one is dead unless they have obvious fatal trauma or airway obstruction, keep the search momentum going, and as a personal view for Scotland make sure the EMRS are alerted so the unresponsive victim gets early ALS and transport to a re-warming centre with ECMO

Abstract: "In companion rescue as well as in the start-up phase of organised rescue, shortage of rescue resources are very likely if multiple buried subjects / patients are present. Therefore, not everyone can be excavated or medically taken care of simultaneously. Triage strategies give advice on the most survival change optimised sequence of actions in order to provide “greatest good for the greatest number”. The remote reverse triage criteria give guidance on most likely areas of survival and the sequence of excavation. The now proposed AvaLife strategy supports the rescuers concerning remote and local triage, in particular the critical phase when some patients are already excavated while others are still fully buried. The last phase of rescue and excavation in immediate vicinity of the buried subject is often the most time consuming part of the entire rescue effort. The combination of close proximity and the general urgency of the situation may lead rescuers to overlook the potential for unnecessary stress for the buried subject. During the excavation of a buried subject, mechanical impact to the body of the buried person may lead to injuries, compromise a potential respiratory cavity, compromise breathing by inhibiting thorax motion/decompression etc. Whereas the likelihood for the imposed impact to lead to fatal consequences is marginal, precautions to limit the chance and extent of impact should be taken as long as they do not compromise the goal of saving the life of the buried subject in a single burial accident or saving as many lives as possible in a multiple burial event. This comprehensive summary outlines the considerations to be taken into account for a wide range of influence factors such as burial time, burial depth, snow hardness, availability of rescue resources as well as the interface to the first medical assessment"


Quite a detailed paper with much of the algorithm already in place with ICAR so folk will already be familiar with them.  Not much is really new as rescuers already know this stuff and these type of algorithms are hard to remember in a blizzard but never the less there is a lot of sense here.  Reverse Triage when there is limited manpower so that you help the ones you can dig out first for example.  Also a nice reminder in the paper about not chopping up the patient.  Another paper I read recently had looked into PTSD in avalanche victims and many said being dug out was the scariest and most alarming part. Worth bearing in mind that at the other end of the shovel you might seem like a mad axe man trying to chop them up and inappropriately moving and hurting the victim. Another very useful mention was of full CPR.  Avalanche victims need oxygen and to get rid of excess CO2 so need ventilation.  Compression only CPR is not really adequate.
Have a good look at the Avalife Basic and Advanced. Any comments welcome.

I like the reminder that in organised rescue its good to have multiple probes in place so that you have a profile of the victim to dig towards. 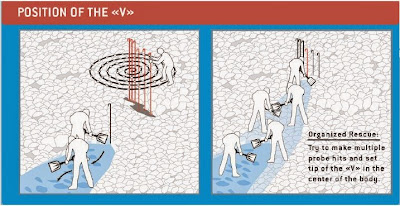 These are just two of very many papers from ISSW 2014 which have been collated by Montana State University.  Many are hard avalanche science but the above are a couple of the more practical ones. Some of it seems self evident but its always good to see another opinion and take on the subject.
at Wednesday, November 12, 2014