Hard Climb on a Bike

We had a great ride yesterday with Coleen and Andrew Foggo.  Fiona was going well but the hills are still a struggle two months post Chemo, but hey!  most folk don't do 50 mile cycles after major surgery and chemo for breast cancer.   She's a star!  I put a new SRAM 11-32 cassette on the back for her with a long cage 105 mech and new 5700 series 105 shifters so she can twiddle nicely up them hills.  Andrew is of to the Isle of Man for the end to end XC Race next weekend so good luck with that.

This week see's me taking on two club time trials (WHW and NACC) and then concentrating on some big miles to build for the Lord of the Lochs Sportive 115 miler.  Yesterday was not long miles but hill training so up Liddesdale and then back to a famous road bike climb - Ariundle Hill above Strontian which I had not ridden before.  It's brutal!  I was very pleased with a time of 16m 48s for my first bash at it and I can improve on that now I know what to expect.  Given a rating of 9/10 in 100 Best Road Bike Climbs in the UK it's well worth a visit if you want a real test of your hill ability.  The only one to compare locally is St Conans to Cruachan Dam which is not listed but is also a 9/10 IMHO.  The Bealach na Ba gets an 11/10 but it is more for its length and duration while these other two pack a huge punch in short climb.

I recommend a compact chainset or triple on a road bike. The final mile is 25% and even on a 50/28 your working hard to maintain a good cadence and steady 240 watts power (tempo for me).  Some folk do the other side as well but its not the quality of the South side although also a big climb.

So why not give it a go.  Ben Miller has probably got the fastest time so far recorded on Strava.  I think about a minute faster than me.  Let us know what you think if you do it.  Exclamations will be plentiful! 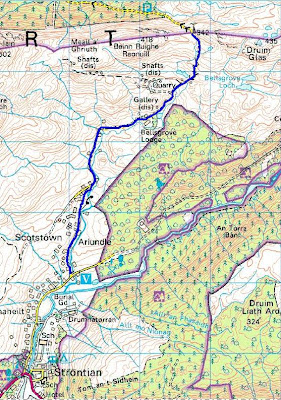