A re post from last year, pre the SAIS site update to help interpret the forecast.  Maybe not as good as the SAIS but another take on the subject to help lay persons get a handle on the forecast and look at it in more depth. Knowledge in depth as well as breadth.


First questions I would ask most folk generally who own a Transceiver/Beacon is: do you regard yourself as "situationaly aware" ie, do you observe the weather and what's around you and what the snows doing under your feet. Do you read the SAIS area forecast and understand it and can you relate it to the part of the area and slope aspects you will ski. If the answer is yes to all of these, then a beacon is a vital part of your overall approach to ski safety and practice is vital. Also, a Beacon is no use if you can't pinpoint a victim so you need a probe, and a shovel, as without a good shovel for you to dig them out the victim is royally screwed. First things first - avoid getting avalanched, it isn't pretty so have a look at this and feel scared:
You will see on the snow pit data below a lot of information from the name of the observer to the OS Grid that you can apply on a map to the aspect and elevation.  The is also a code on the bottom corner.  The first figure is any observed avalanche activity that day and the first figure is 5 which shows 5 avalanches were observed. The others relate to wind and overhead conditions. These are entered into a computer model. 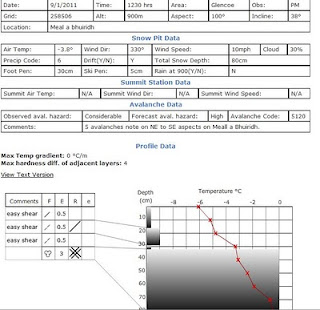 F = crystal type - the classifications are: 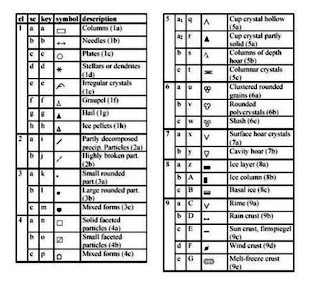 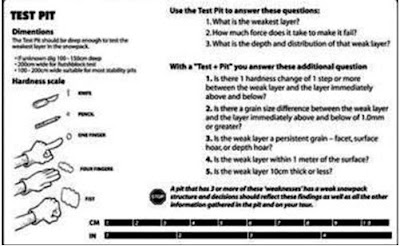 e = the water content. The number of vertical lines goes from 0 to 4 as the snow wetness goes through dry, moist, wet, very wet and slush. 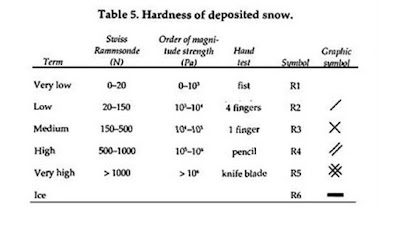 TEST PITS
The SAIS forecast covers an area. To be more specific we need to lots of smaller tests as we go to test aspects within the forecast area. These are easy compression and shear tests. Remember that they are only valid for where they have been done - 10m away it might be different and for that reason use your eyes and look around you, and make judgements using all the information your senses bring you.  If it looks iffy, feels iffy then its probably staring you in the face that its a good day to go somewhere else and ski something less risky.
Shear tests can be quick and easy to interpret for where you have done one and work for most kinds of weak layers given the caveat about there usefulness above.


Start by isolating a column about the same size as the blade of your shovel, in other words, about one foot by one foot (30 x 30 cm). Be sure to completely isolate the column. Then take the blade of the shovel and lay it flat on top. Finally start tapping progressively harder on the shovel blade until the column fails. Start with ten taps by articulating from your wrist, then ten more taps by articulating from your elbow, then ten more from your shoulder using the full weight of your arm. Don’t push your arm into the snow, but let it fall with its own weight. In this way, the test is somewhat quantifiable. In other words it doesn't depend on “feel” or the opinion of the tester, but it has a reproducible number which is more or less same for most people and can easily be communicated to others. For instance, it failed on an easy tap from the elbow, or it failed on a moderate tap from the elbow or perhaps a hard tap from the shoulder. Since snow stability is dependent on the size of the trigger required to make it fail, this test is especially easy to interpret. Of course, if you have an unusually light arm or an unusually heavy one, you need to take that into account.