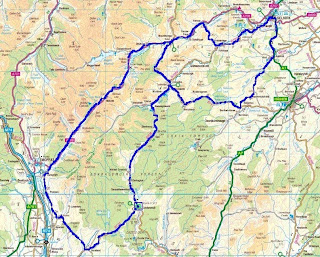 Short & Long Loops - click to enlarge
Firstly, many thanks to our friends Rod and Louise McIntosh for feeding us and giving us a bed for Friday night before the race. Early registration before 8am, a great Korma from Louise and a good nights sleep fairly took the pressure off. It was great to have them cheer us up the 12% hill past their house at the unearthly hour of 8.30 on a Saturday morning and also there to cheer us in at the finish. Rebekah and Rod and Louise's girls get on great and had fun.

Rod tells Louise he want's the new Merida Carbon FLX Team -D at only £3,500 for the frame
From the get go it's apparent that this event is very well run and in a different organisational league from other Sportifs. The Selkirk Rugby club and it's grounds can park and camp hundreds, and the showers are a godsend to grimey tired bikers. Displays and demo bikes from Merida, and the many hundreds coming and going preparing for the Sunday off road MTB event, gave it a real buzz.
The Sportif ride started dreich and hilly with Fiona and I together for 24 miles until she turned off on the 47 mile route and I carried on for the 92. Fiona's ride was 47 miles with 3,120ft of ascent which she did in a very good time of 3hrs 17mins. Her route included "The Witchie Knowe" a famous borders climb on the bike at a grade of about steady 8% for 3kms. After the turn she benefited from a tail wind but her ride was wet throughout but she still rated it as great. 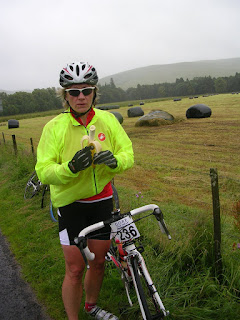 Banana Power
After Fiona turned off I had a further 20 miles up over Eskdale Muir in low cloud, mist and heavy rain against a 20mph wind. A few folk abandoned and went back but I kept the head down passing a giant Bhudda which I put down to low blood sugar but turns out belongs to Europes Biggest Tibetan Monastery. This section has many long hills at 6 to 8% and is quite taxing. After the turn off over the hill to Moffat is a beast of a climb rivalling the Bealach na Ba but shorter and a section at 17%. I let quite a few groups past earlier to pace myself and it was nice to dance past these folk either walking or blowing out their arses. The weather cleared on the Moffat side and the run back to Selkirk started well on the big ring passing loads of groups who couldn't get on my wheel. Fantastic countryside and the long haul up "The Grey Mares Tail" glen was superb and one of the best, even if it it's a long steep 3km's at 8 to 10%. A great fast descent then long flat section then up over "The Witchie Knowe" which is a another beast of a climb and quite long. I caught a fast well dressed group on very posh bikes who got quite twitchy when I passed and said "its quite steep isn't it?" to them A race developed to the top which I was very pleased to win even if it put me in the red zone. A really swoopy descent on cow shite plastered hairpins and then it was big ring back to Selkirk and the finish, in 6 hours, 91.7 miles, 4,500k/cals and 5,220ft of ascent - and sore legs. Thankfully Fiona had anticipated me being buggered, so tea and buns and a change of kit was waiting for at the line. She's a star as she was pretty tired after a hard run herself. 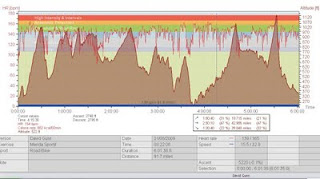 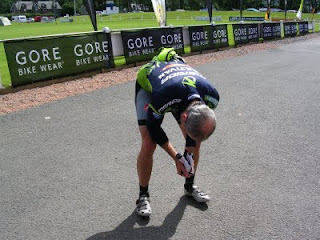 It's Done
The feed stations were friendly, helpfull and well stocked, and the route marking faultless. A superb and very well run sportif event in interesting and superb cycling countryside. We will definately do them again, and legs willing do one of the 4 mountain bike courses on the Sunday as well. Highly recommeded event with good organisation, facilities and routes.
at Sunday, August 02, 2009