Loosing the Plot and the Covid Shitstorm 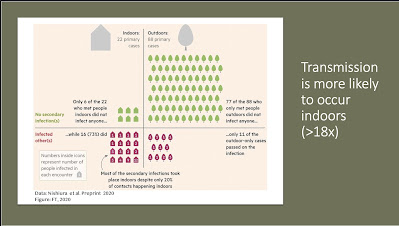 We are in a shitstorm of trouble as a nation of that there is no doubt, nor that we all have to play our part in reducing infection and harm by complying with guidance. None of us should be looking for loop holes or pushing them, but life isn't simple and if its a choice between self harm for someone and a hill walk or tending to someone in crisis then as long as the basic FACTS measures are followed then so be it. Scot Govt guidance is fairly and unambiguously set out in the original tier structure and included in them is the acknowledgement that outdoor exercise is good. Following input from outdoor representative bodies at the end of the last lockdown it was allowed to continue even at Level 4. These levels were to be the be all end all, so to have Level 4+ is difficult. I appreciate the new variant is more transmissible, but only if you don't follow the extant guidelines. That the virus is spreading IMHO shows  that folk are not heeding whats already in place, not that more restrictions on an already fatigued population will work. Its becoming easy to blame the public when the root failing is at government level so best to not loose perspective that compliance is shown to be 90%+ but that doesn't make the headlines like the ones who spoil it.
Under the enhanced lockdown curiously skiing is not allowed, but golf and professional football is with its concomitant goal scoring hugs and kisses and travel to exotic locations with no return quarantine even with a positive case - nice one Celtic! Folk can go to the mountains within the boundary of the council area they live, or no further than 5 miles into another region which some in the more populated central belt will need to do to access a hill. Folk should enjoy the hills and mountains and use common sense not abusing what is a privilege. Outdoor recreation is being singled out wrongly but maybe understandably by ignorant politicians and pundits having a go at a socially responsible demographic group.  Well managed ski areas like Glencoe and Glenshee who restricted numbers and went to a great deal of trouble in managing interactions and social distancing  had to pay the price for the Lecht who didn't. Climbers and walkers kept a low key until some poor bugger from Oban needed help and got unfairly vilified and fined. Us older folks see Oban as our local town as we are Argyll born and bred, and from where the poor sods were rescued its only a mile to the county boundary.  Should never have happened or  been newsworthy. Whoever thought you could get fined for getting out and going up a hill and needing some help.
For reading on outdoors spread here are just some things worth a read:
https://assets.publishing.service.gov.uk/government/uploads/system/uploads/attachment_data/file/945978/S0921_Factors_contributing_to_risk_of_SARS_18122020.pdf
https://academic.oup.com/jid/advance-article/doi/10.1093/infdis/jiaa742/6009483
https://www.medrxiv.org/content/10.1101/2020.09.04.20188417v2 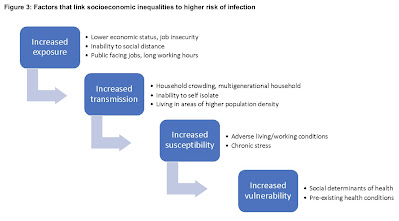 For Highland residents we have  an extensive recreation area, so common sense should prevail on the distance folk could travel for their recreation. For us in Glencoe a radius of about 17 miles gets us to shopping in Fort William and maybe a wander up Glen Nevis, or down to Appin or up to Bridge of Orchy so maybe for me a solo ski tour up at the now closed ski area.  I appreciate for those in the higher prevalence areas its very frustrating not getting to the Highlands. From what I have seen folks have been getting out onto the highest point within there own boundaries and at least feeding the outdoor rat.
Where we go in the hills and mountains we are unlikely to either meet anyone else, or have any close contacts other than in Morrisons if going that way. Shopping last I looked wasn't contentious, but the same can't be said for the polarised opinions on travel for exercise with some loosing their shit over folk choosing ascending a Munro as their exercise instead of taking local low level walks. SMR have already put out a statement saying they are ready and willing to attend if required should there be an incident. At the moment its not hillwalkers and climbers taking up NHS A/E time but been slips and falls on icy city street paths. MR is voluntary and as these folks are also mountaineers I am sure also enjoying the mountains for recreation as I would be if still involved. 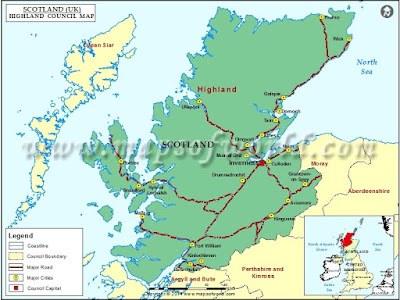 We in Highland are really lucky, and perhaps its too easy to be in our ivory tower surrounded by snow packed mountains and throw opinions at folk less fortunate, perhaps cooped up in a city flat. Driving out to Ben Lomond or Ben Ledi for example might just stop a mental health issue, be a de-stress or stop someone throwing a rope over tree. A bit of live and let live, empathy and some compassion would be better than judgment.  That's not to say its a free for all and Covid not an issue as it most surely is, and we certainly don't want it in our community here in Glencoe. Someone driving up or down within reason from another Highland location or within 5 miles of the boundary, parking up a glen, climbing a hill then going straight home isn't a threat. Its all a question of perspective. 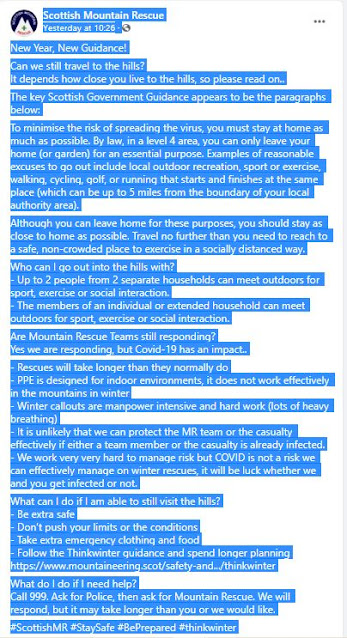 We have given up much of our liberty to get through this epidemic for the common good. The toll with other disease mortality and morbidity is going to be colossal and the unseen under reported suicide rate. Covid has to be beaten, but I worry at the cost.  Sometimes it feels like what it must have been like another darker era in European history with second home owners reported as lights on in a cottage, or neighbours reporting the number of folk in a house. It may be justifiable reporting in some cases,  although personally i find i cant do it, as it reminds me of different regimes in history.  I also don't know the story of these folks so cant judge them. The mishandling of the epidemic has turned us against others from the outside to take the heat off the criminals governing us. That we should be locked down I agree with,  and with compliance. I just hope what is being lost along the way can be regained. 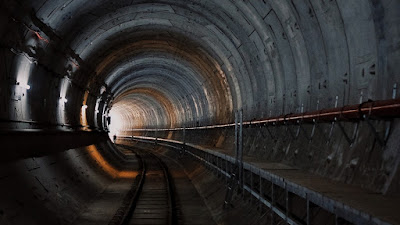