Who knows what this winter will throw at us in these uncertain times. For sure the ski areas that are open may well be very busy indeed not only with regulars, but snow hungry off pisters who normally ski the alps and may well be complacent about our smaller mountains that punch above their weight literally when it comes to avalanches.

Nothing substitutes good planning and knowledge to avoid getting avalanched, but the very nature of the sport is uncertainty and with enough risk exposure bad things can happen. It's fair to say as ski patrollers and hard charging skiers that means us. The point has been laboured often enough by me that nothing substitutes having the three essentials of transceiver, shovel and probe and being slick with deploying them effectively, and managing the scene well, which comes down to practice.
Sadly mountaineers do not have the same philosophy as off piste skiers and tourers about companion rescue, and the focus is very much on prevention such as the SAIS "Be avalanche Aware".  All well and good, but sadly when buried often the mountaineering victims cannot be found in a timely manner by companions, and worse still organised rescue even if on scene quickly has few means of finding them other than probing, or with luck a search dog. Recco is not a panacea for this, but it does add an incremental gain and every year lives are saved by it as victims are found alive. From burial, avalanche search statistics show that companion rescue gives the best chance of survival, then Recco and also in the alps avalanche dogs, with least live recoveries from formal probe lines. Probe lines do find folk alive but not often, and while most victims are eventually recovered by a probe strike it's down to the sheer numbers of searchers and length of time poking in the snow, all mostly at the wrong end of the survival probability curve. Spot probing, a random poke in the snow in likely spots also occasionally results in a survival, but that's down to luck unless it's a really small confined slide. If you're searchable you're found more quickly and more likely to survive.
Recco continues to be accepted into more clothing brands and now also into mountaineering clothing as the "be searchable" message gets through to the winter recreation public.  Recent additions are Patagonia and Arcteryx into mountain specific technical garments. The Recco SAR pod is now with more helicopter based search and rescue units such as Air Zermatt, PHGM and CS Chamonix and to sites across North America. Quite a few notable success stories from this, and not all avalanche based with some in water or in dense forest.  When the helicopter flies at a height of 100m, it is able to scan an area that is 100m wide. When the speed of the helicopter is 100 km/h this translates to 1 km2 coverage within six minutes. 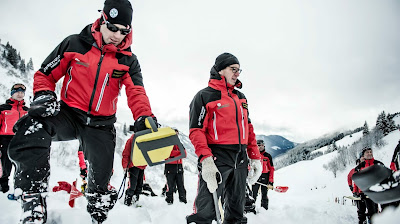 As the UK's trainer for Recco I am happy to offer advice on training on the system to anyone interested. I also sell aftermarket reflectors and for BASP members and patrollers I can offer a discount. I can do either single pocket reflectors to be carried, or helmet reflectors. Two reflectors are the optimum to carry. Please note if you have an Ortovox transceiver that is less than 4 years old it will already have a Recco reflector inside its workings as a backup.
Unlike a transceiver search along a flux line, Recco harmonic radar is a straight line to the victim and a Recco R9 detector is equipped to search both harmonic radar and 457kHz transceiver simultaneously. The 457kHz is analog allowing a greater range than digital and the ability to hear more than one signal and detect overlap. When nearer the victim the Recco becomes primary and a second rescuer hones in on a digital transceiver signal - or vice versa. Who cares who finds the victim first as speed is the key. If you're not searchable then the odds are stacked against you until someone pokes you or it thaws.