In the shadow of Mont Ventoux

Check out this interesting article in the Times So what do we do in the final build up to the Tour de France? Well first thing is first; we diet. Then we make an assessment of where our physical condition is, if it is where we want it to be we maintain it; if not, then we train it. The complicated bit is that if we need to train then we have to do it in a way that still allows the body to be fresh and good-to-go come the first day of the Tour — not be suffering residual fatigue as this is the worst way to start a Grand Tour. That would mean that the second half of the race will be nothing less than hell as you will enter deep fatigue and very rarely see light out of day from the depths of your own personal ‘Pain Cave.’ Super-trained and fresh is the ticket to success, and not nearly as easy it may sound to achieve.

For me the dieting bit has been quite easy. The main reason being that I was able to significantly notice the difference being lighter made to my performance at the Dauphine therefore not see it as being a sacrifice not eating much. Now one may ask, if this is the case then why hadn’t I done this before, the answer is I HAVE! But although I have dieted enthusiastically the last couple of years each time I would bottom out at weight above my optimum race weight, so although I would have very low fat percentages I’d be carrying too much muscle (which is embarrassing to say as I’m not exactly Arnie, but it’s all relative…) that I couldn’t lose. Eventually I put this down to my body simply changing after my two years away and that I was a slightly different rider, matured not only as a person, but as a man! It would appear I’ve just become more efficient and haven’t needed to eat as much, and in particular need less protein than I thought. So now I’ve lost that extra muscle and am running 3kg lighter, what may not seem like much but is enormous at the highest level of cycling. Carrying 3kg extra around for 5 hours up-and -own mountains is most definitely not a performance advantage. So that’s the dieting bit taken care of. If you’re curious to what the diet involves, it’s incredibly simple: BALANCED diet of which I only eat when I’m hungry and only to the point at which I feel I’ve had enough, I never feel full, and ride my bike lots. The training part is more complicated; Adrie and JV have me doing no intensity whatsoever. We have come to the conclusion after the last year that my body adapts so fast to training that I need to essentially use my time away from races simply ticking over, in the words of Steve McQueen, “Racing is life. Anything before or after is just waiting.” I have been doing a lot of hours on the bike, surprisingly so, my week post Dauphine was big regarding the hours spent in the saddle, but there was no specific work or TT bike.

The only reason I can do this is because after 17 years of riding a bike I have finally learnt how to ride slow, one of the most wonderful discoveries I’ve made as a cyclist. It allows me to arrive at the races fresh and itching to go fast. In fact it was how I based much of my early career, although then I would just come out of races and barely touch my bike till the next one — that was possible then as it was orientated more towards my survival than my performance. I remember before the 2001 Tour de France I’d already done 58 days racing, which these days would be considered TOTAL Insanity. To be fair at the time I thought it was TOTAL insanity, but I didn’t have much say in it… That leads me to now, Allen Lim has led the ‘Dans and Daves’ training camp in the Pyrenees near Girona. Pate, Martin and I rode up here from Girona on Monday, a lovely six hour jaunt, Dave Z drove up here after and then we all rode the final 120km of the first mountain stage of the Tour de France yesterday. A stunning stage, the landscape is quite breathtaking at times, we pass the summit of a tricky Cat.1 with approx 100km to go on a road that I will not be able to enjoy nearly as much in two and a half weeks. The view will simply not matter that day as only the bodies around me and the mountain ahead will exist.

The mountain we finish on is Arcalis in Andorra, one I know quite well from previous visits in the Vuelta Espana and the Volta Catalunya. I think I’m correct in saying it’s where Jan Ulrich sealed his Tour win in 1997. I was asking Dan if he remembered watching that; it was my first year pro, Dan was eleven. Needless to say it didn’t have quite the same effect on him as it did me!

Now we’re preparing to ride back down to Girona. First we have breakfast at the restaurant of our chef for the Tour de France, a guy called Sean who lives and owns a restaurant in the Catalan Pyrenees, yet hails from Colorado; you couldn’t make it up. He is an amazing chef who is a cyclist himself, and is going to make a big difference for us at the Tour. Tommy D discovered him as he lives just a few kilometres away from the restaurant and was told of another American living in the valley by the locals. It’s odd how these things happen sometimes. Ten days to go till the Tour, but first I’m flying back to the UK to meet up with Bradley to race our national championships. It’s going to be fun in what will no doubt be our best nationals in years. I’ve got to ride back down from these mountain first, as slowly as I possibly can, hopefully the Dans won’t mind me sitting on the back for five hours… How not to Race

Only a 10 TT last night, but the hardest of 2009 pour moi as tres malade. Dried fruit eaten before race turned out to have a sulphate preservative on them which I have an allergy to. So 25:40 of behind wind into a headwind ending in feeling really ill and wondering if the next stop was the Belford. Being dehydrated was my own fault though but 3 litres of fluid overnight turned the kidneys back on. Better luck next week for the last one I hope.
at Wednesday, June 24, 2009 No comments: 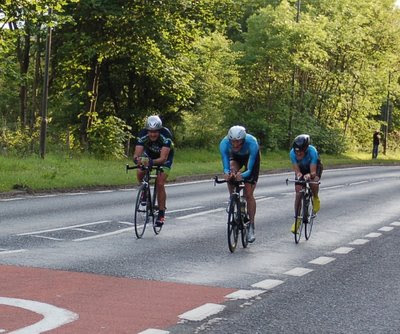 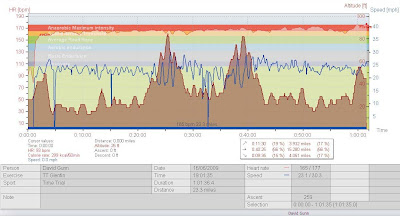 Very pleased with 25 miles in 60 mins last night. HR profile above, with a max at the end of 177bpm when Fiona took the picture. 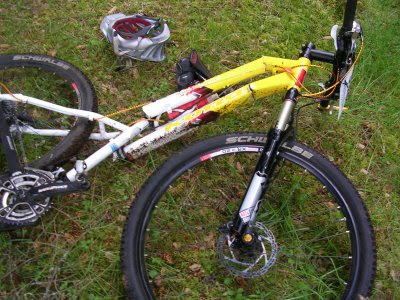 Broken bike from tree collision at the SXC last Sunday. Rider had collarbone #
at Wednesday, June 17, 2009 No comments: 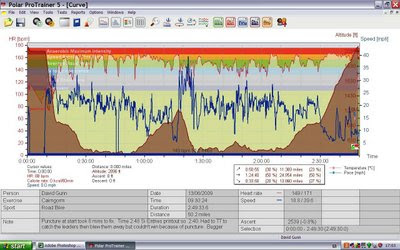 Click pic to view
Rain and waterlogged roads with fog at the mountain start and finish made this a re run of the Bealach Beag. Bloody Cairngorm car park was a stony mess and the broken cross drain at the start cost me and 30 others a puncture. The descent was dangerous and all in the start was unsafe IMHO. 8 mins out to sort the tyre and puncture then it was 30 miles on my own to catch a fast group of uppwardly mobile proffessionals all in Castelli clothing and Cervello bikes. They couldn't organise themselves and despite offering to take a spell I got a tow for a bit then left them for dead on the climb as they tried to outclimb me. It was with great satisfaction that I got 7 mins ahead of them as they blew up. Quite happy with my official 2:48 but the 2:40 without the puncture would have been better. A dry day would have allowed more off the brakes on the dodgy start. The profile shows me in TT mode and my HR was too high for this length of event and should have been in the aerobic endurance/Average road race band more. Means I will suffer for a few days and the 25TT will need to be thought about.

All registrations at 19 race start 11.

Good fast XC with kids courses and prizes!
at Tuesday, June 09, 2009 No comments:

My first win of the season. I didn't break the course record (which I hold at 27.41) but close considering the windy conditions and the 10 under and Tuesday night TT. Profile shows the HR and the classic TT specialist engine (top line) required to hold a high power output. The blue line is speed and the brown humps are 13% hills !

A great piece of video on the No Fuss home page