Like everything slate in this quarry, the rock is questionable and not without some risk. However, there are some slabs of firm hard rock with nice quartzy pockets. Its all now mossing up as no one uses it anymore but at one time a few folk played in here on occasion.

There are quite a few other routes even a severe by Mike Hall up a slab on the big back wall 2nd terrace. Its esoteric and some areas high risk of rockfall on approach. Plenty of scope if someone wanted to make sport routes on some big slabs of harder rock that is pocketed.

Just inside the quarry. Stakes at the top and a large block.  Was popular with an outdoor centre and some military groups.

A The left Rib. Climbed by many over the years at least since the 1970’s Hard Severe’ ish

B The wrinkled quartz slab with pockets. Solo DG 1978 5a/b 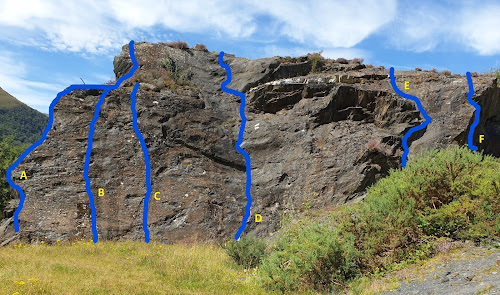 Above here hidden now behind some trees is the orange wall.  This has two routes. One on the left side (5) by Paul Farrel and one up the middle (6) by DG. Both solo and about 5b. Bear in mind these were done 35+ years ago and the top outs might be sketchy. 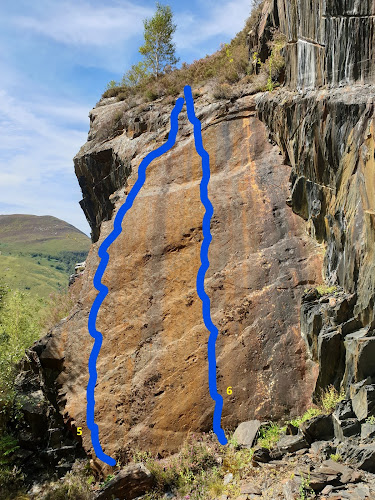 Further into the quarry is a bay now overgrown and fenced off, although still possible to easily squeeze past into it.

Five routes in there. The lower of the prominent crack lines (1) is about 5a/b soloed by me and the one above (2) harder and a bit sketchy and was done on a top rope. The two lines straight up (3) crossing these are good fun on small quartz holds and good footwork helps, both soloed by me and about 5a/b. (4) is the best and was good fun. A route was done in the corner of the slab by a visiting Welsh climber and had a peg in place and was about E3 6a and has never been repeated. Can't think why! 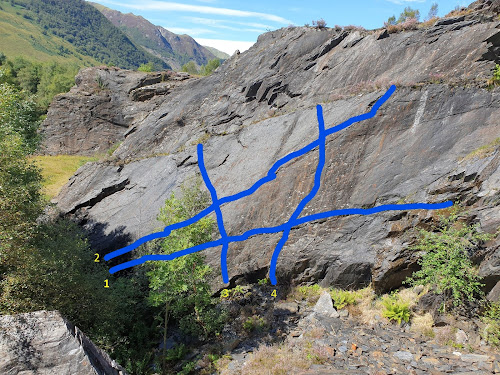