Self Improvement and Peter Pan Syndrome

The philosopher and author Jordan Peterson aptly describes a "Peter Pan" effect when boys don't grow into men by their mid 20's and take personal responsibility for the direction of their lives. He's quite a contentious philosopher but there is much truth in what he says. He hints that when men do come out of being a "lost boy" (some of us had to grow up much, much quicker than that) its ok to rediscover the freewheeling attitude of youth, try different new things or throw yourself back into old things with gusto. Basically get some youth back into your old bones and soul.


Climbing re-discovered for me is my late life Peter Pan effect I think. I have been among the mountains and trying to be a climber since I was maybe 13 years old. Not always very successfully as an early rescue of myself and friends proved when at 16 years old Hamish and the team rescued us from an icy North Face of Aonach Dubh when I was left at the end of the frozen rope in an icy gully. Mountain Rescue involvement was long part of that growing as a person as at that time it was a small rescue team very strapped for cash. It was where all active local mountaineers migrated to or were co opted to help out as rescues were a moral obligation and often there just were not enough team members, and it was the only way someone was going to be recovered. This only really changed in the mid 1980's. The only way it could happen was if the local or visiting mountaineers went out and made up a rescue team. Folk were called up by phone, grabbed out the bar or co opted when up staying with a friend on a climbing trip. Often these were among the best mountaineers of their generation and from Glencoe School of Winter Mountaineering. It was in effect also a climbing club. As a young lad  learning to become a mountaineer and having a love of the mountains could be overshadowed by tragedy and a normalisation of dealing with that. Putting somebody in a body bag at the foot of a route then climbing the same route at some future point and with a smile on your face because you had enjoyed it seemed ok. So I suppose like other lads in Highland Glens who took to climbing, the two things, MR and Climbing ran in parallel and were a little bit firewalled from each other. Although making the same mistake on "Big Top" as a climber who we new was killed by not extending the runner on the bulge and step on the last pitch was thought provoking, as was the fact it had started raining hard while literally hauling the rope a bit at a time to the top. Character building. Not really.

I always thought that was ok as it never stopped me exploring and climbing some of the hardest routes of that time. Over that forty five or so years, forest work, falls and accidents took its toll a bit. Crippling back injuries, chainsaw cuts and broken bones, a debilitating chronic illness and also some mental health issues from trauma and tragedy not all MR related all at one point came to a head and I turned my back to the mountains and hated them. When an old back injury came back to haunt me and I couldn't walk I sold all my climbing gear. That was it over with the mountains as places that take too much - or that was how it seemed.

I was on my first rescue at 15 years old and on reflection the early years were a golden period where the tragedy was never permitted by my mentors to interfere with the climbing as they were climbers and mountaineers above all else, and that allowed me to develop into one as well. I would be very wary of allowing my son even now a good climber in his mid 20's to be involved in what is now a more organized but not necessarily a better service. I think firstly you need to become a good climber/mountaineer for yourself before allowing the mountains to show you the dark side on a regular basis. It's too easy to become a rescuer rather than mountaineer who rescues, as it was back when obligated by a small population with few mountaineers and local necessity to form a rescue party.

These musing are leading somewhere. Its maybe a bit of stream of consciousness stuff. After selling my kit and hating the mountains, five years later and after much rehab  I could run again despite a hip impingement picked up on an MRI and raced my bike and then really got into ski touring.  Due to my son getting the bug again for climbing it got me back up to the wall and training and ending up having to buy some climbing gear. I was really well supported by lifelong friends especially Sean MacNeil who donated his old climbing rack to me. In just about everything I do I try and apply myself to be the best I can. Be it self taught spey casting for salmon, to sport climbing or skiing. If you work hard at it you improve.

Currently I do a lot of core work, yoga stretches and conditioning and follow the lattice plan and despite the years I see progress. There is lot I can't do but I am blessed with strong fingers and arms and I am getting there and seeing progress. Self improvement doesn't stop when you get a free bus pass. Climbing and the mountains re discovered are giving back that feeling of being part of a unique tribe of wanderers and seekers among or over the high tops, and meeting like minded folk. It's not always about grades although for me that's a measure of indoor success at the walls and being goal focused it provides a measurable result. While at a wall folk chat about what they have done, where they have been or life in general and its good social. The same is true out at the crags. I also have Fiona belaying me and despite being unable to climb because of her surgery and drug side effects she also supports me. In many ways its much harder for her as its a reminder of what she can't do, but despite that she participates and supports often acting as trip photographer when away exploring. It's great to enjoy the mountains again and to have forgiven them. They are in the end benign lumps of rock but they allow us space to be free. This quote sums it up better than I can:

“The secret of the mountain is that the mountains simply exist, as I do myself: the mountains exist simply, which I do not....I ring with life, and the mountains ring, and when I can hear it, there is a ringing that we share” Peter Matthiessen, The Snow Leopard 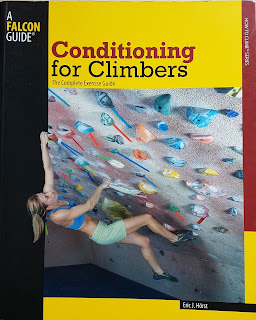