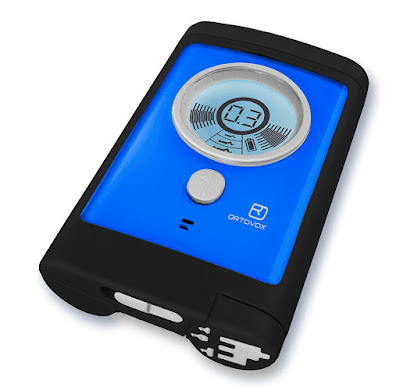 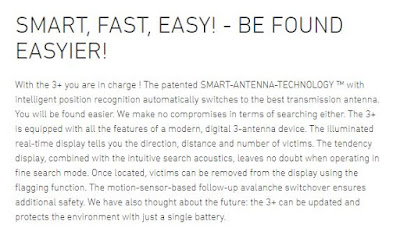 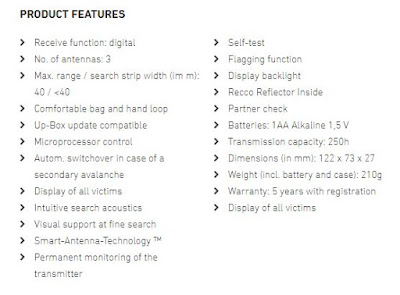 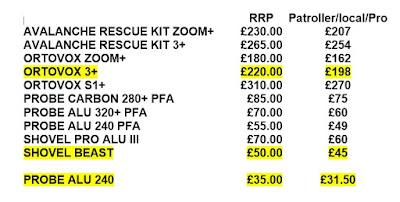 Items highlighted in yellow make a tremendous combination with the benefit of an extendable shovel over the rescue kit. In addition you get a transceiver that has a mark/flag feature and built in back up Recco reflector, as well as smart antenna technology.

Old Trackers on eBay and Winterhighland

The ubiquitous Tracker 1. Still on sale, often advertised second hand on eBay, Winterhighland and other sources such as social media.  Probably the most common transceiver carried for many years as the first digital transceiver, and a huge improvement on analog. It's quite fast, but it only has two antenna's.

I tell my students/customers to get an upgrade to 3 antennas which is better by far, especially when getting close to the victim as unlike the 2 antenna transceivers there are no "null points" or signal spikes.  I see lots of second hand T1's getting sold off. The newer version T1 is still probably ok but the original version is so old that I certainly would be very wary of buying one (I personally wouldn't) unless I checked its battery terminals, and range checked it on both send and receive to a modern beacon to see if it has frequency drift and maintains power. You could be fine with a newer one, but better to put the money into a new model such as a Tracker 2 or even 3 in my opinion, or one with a mark feature. Which is probably what the seller of a second hand one is doing with the money you give them. Sellers would be better keeping the old ones to bury and practice searching for. To put reliability in context I have lost a few old transceivers that stopped transmitting in the snow on recovery scenarios. You get what you pay for second hand.

Students on my training days like the speed, simplicity and clear display and mark feature of the Ortovox 3+. Default auto revert is ON (BCA trackers it's OFF).  This would be my beacon of choice as value for money for most folk, with the right balance of speed, ease of use and simple but reliable features which include smart antenna orientation and the built in Recco strip so the victim is more searchable by the Recco system in organised rescue. So save you pennies and get a new transceiver.