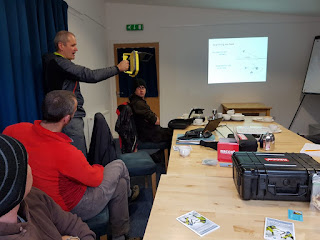 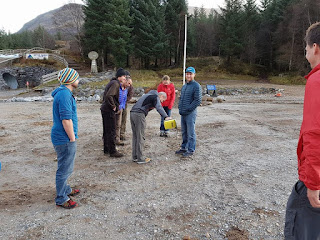 Recco - another important part of the organised rescue strategy. Education and avalanche avoidance is primary, being found early by companions if it goes wrong is vital and prior practise makes this work. Organised rescue requires a triple response when companion recovery fails: Dogs, Recco and Probe Lines. Until recently  has only been able to apply two of the three, unlike alpine rescue avalanche search where for years all three have been used as an all in approach. Survival is time critical. So it's really good that Nevis Range Ski Patrol are now equipped with a detector and for folk wanting the additional security to the three essentials they can buy Recco reflectors at the ticket office. Mountaineers in Scotland don't tend to carry the three essentials and education may well be the key, but it doesn't seem to change the fact that most fatalities are for mountaineers, often multiple burials in terrain traps and perhaps being searchable might just save a life or return someone remains to their loved ones for closure that much quicker even if sadly too late. http://www.mountain-training.org/blog/avalanche-rescue-and-safety-equipment  gives a fairly common sense approach. But errāre hūmānum es

Much has been made of trauma being the main factor in poor survival in Scottish avalanches. I have heard it punted often and its refered to in places like UK Climbing. Sometimes this is from professional mountaineers and even rescuers. Without any study from this country (Scotland) we can only apply the data from European studies and that indicates that 73% of deaths are from asphyxiation, 25% Trauma and 2% Hypothermia. Studies per country for example the USA are not dissimilar (see pic below) and several published studies support the notion that we can most likely say its most likely the same ratios apply in Scotland. Its also worth speaking to the rescuers who were on scene at some of the major Scottish avalanches, and while only anecdotal it lends support that the pattern is the same here. One catastrophic event in one Glen can easily overwhelm, but things need looked at over a long period and from all areas to make conclusions and avoid post incident bias from any one event where avalanche and trauma combine. This becomes especially important looking to the future as the victim base changes from primarily mountaineers to skiers who are now in ever increasing numbers skiing "Backcountry" Freeride/Touring and "Splitboarding".

To reiterate: Opinion from some might lead the public to believe that trauma is the main killer in Scottish avalanches. This in my own opinion is not really backed up by evidence and may in fact be dangerous as it allows those hearing it to anchor to the precept that "being searchable" and carrying companion rescue equipment is pointless as its not the asphyxia, it's going to be trauma that kills you. This is dangerously misleading in my opinion. Trauma may well be a contributing factor on the time continuum of survival, and in some cases due to the unique nature of Scottish winter climbing Scotland may have some more pure trauma deaths from avalanche, but that's not the whole story and the recreational demographic is changing.  I wrote a Blog post on this some time ago with some "back of an envelope conclusions". These cannot and should not be taken as gospel as its just very rough opinion. If nothing else its a wooden spoon to create debate http://crankitupgear.blogspot.co.uk/2016/12/triple-h-or-trauma-in-scottish.html

So, its not a given from Scottish data collection (scope for a project for someone) and even if the odds are higher for injury, then unless folk are searchable victims who could be saved from asphyxia will continue to be lost under the snow until its too late. It's also incumbent for folk in avalanche education to give a broader picture as most ski students on an avalanche class will also be going abroad. My own experience is that its a trip to an unfamiliar country or wish to explore more off piste at an alpine resort that triggers folk taking an avalanche class as much as it is wanting to be aware of the Scottish conditions. We need to continue to give the bigger picture.

Further reading should include:

Some Scottish MR teams already have Recco as part of their search strategy (Tayside, Glencoe, Cairngorm MRT/Ski Patrol) and Nevis Range, Glencoe Ski Patrol's. A good thing. I can imagine nothing worse than a victim recovery delayed because a search team did not have a detector and the victim is found to have either a Recco reflector or a harmonic on them.

Every avalanche professional including Recco, and the clothing manufacturers, endorse the view that not getting avalanched, through education and training is better than needing any search devices which may be too late. However, in the real world shit still happens and unless someone is "searchable" a rescuer cannot find them readily, even if the poor victim has bottomed out of the survival curve. We should not forget Robert Burnett's remarkable 22 hour survival in the Southern Cairngorms or the survivors at Nevis Range ski area who were buried for 18 hours.

All victims surely deserve the benefit of the doubt and rescuers throwing all resources at an attempt for a live recovery.
As "off piste" and "Back Country" skiing grows in popularity there is every reason to imagine that being more searchable can save lives. Nothing can replace education and prevention, or fast effective companion rescue with beacon, shovel and probe, but as ski patrol and MR teams take up Recco, and the reflectors can be bought and carried, then the chance of getting found alive by organised rescue if on scene quickly increases. I would recommend two reflectors to mountaineers, One front top and one back bottom.

So Recco is here in  and its great to see the take up by some enlightened Scottish rescuers adopting alpine best practise. Who knows when Recco will save a life, but if it does it's job then its been  money well spent.

Some Examples From Season 2015

The following are some rescues where RECCO technology made a difference, or could have. The first two rescues mentioned below occurred in Spain’s Pyrenees and deserve attention as they highlight the importance of being searchable. At Baqueira, RECCO technology quickly located and saved a buried off-piste skier, which then helped rescuers find the second buried skier who was also found alive. In the other accident at Candanchú, the search operation and outcome were very different as the skier was not searchable. Rescuers found the skier dead the next day.

Baqueira-Beret, Val d'Aran, Spain, 2 February 2015
Located in the Pyrenees, Baqueira-Beret is the largest and busiest ski resort in Spain. On Monday, February 2, a group of 4 off-piste skiers were caught, and 2 with no rescue gear were completely buried in a soft slab avalanche. The ski patrol responded immediately. The RECCO detector operator found the first skier buried 1.4 meters after a 6-minute search. The skier’s cell phone (facing the surface) likely reflected the RECCO signal. Once found, rescuers had the indication where to focus their effort and located the second skier, buried 1.5 meters, about 20 minutes later by probing. Both skiers survived. Mountain rescuers from the Bombers de la Generalitat with their helicopter joined seventeen ski patrollers to rescue the pair. It is not easy (and sometimes it’s impossible) to find a cell phone or other electronic device because of weak signals and short ranges, but this rescue highlights the importance of searching with the RECCO even when the person does not have reflectors. Special thank you to Francesc Rocher, ski patrol director, for sharing details.

Candanchú, Huesca, Spain, 31 January 2015
At the end of January the Candanchú ski resort was hit by heavy snows and strong winds, which closed parts of the resort. On the 31st, two backcountry skiers triggered an avalanche in the Rinconada area, an area that was closed at that time because of the severe weather. Neither skier carried any rescue equipment. One was not buried and called 112 (equivalent of 911). Ski patrollers found him suffering from hypothermia. The other skier was buried, and rescuers from the ski patrol and the Guardia Civil searched RECCO, dogs, and probes into the evening before suspending the search because of bad weather and increasing avalanche danger. The search resumed early Sunday morning. As the skier was not searchable he was eventually located – deceased – by probe line some 20 hours after the avalanche. Special thank you to RECCO Techs (and Bomber instructors) Bernat and Francois Carola for additional information.
Polar Circus, Banff, Canada, 2 February 2015
Late Thursday afternoon in Banff National Park a Canadian Forces search and rescue technician was swept over a cliff while he and his partner descended Polar Circus (700+ m ice climb) on an official military training. The pair had just rappelled the upper portion of the route to a steep, snow-covered bench. The victim triggered an avalanche after moving ahead to set up the next anchor while his partner coiled the ropes. His partner searched the area, but neither had transceivers. Late that night the Parks Canada mountain rescue team received word of the accident. An incoming storm dropped up to 1 m of new snow by Saturday, which prevented any searching on the ground. Extensive mitigation work with explosives on Sunday triggered many big avalanches that spilled down the route. On Monday park rescuers were short hauled by helicopter onto the debris and searched for a few hours with 2 dogs and RECCO. Because the terrain is a technical ice climb, all searching was done while roped. Since it was known the climber was not equipped with a reflector, the RECCO search was done slowly with a tight grid pattern. As the dogs were equipped with reflectors, the operator had to wait for the dogs to move out of a sector before searching with the detector. On Wednesday a detector operator picked up a RECCO signal that was being reflected back by a Mammut headlamp the victim carried in his backpack. He was located under 2.7m of debris. This search is a good reminder to use the detector’s earbud headphones especially when searching for incidental electronic devices. Weak signals can be better heard when using earbuds.

Orelle, Savoire, France, 3 March 2015
Four skiers were caught in a small slab avalanche that swept 3 skiers over a 15m cliff and buried 1 skier. The alarm was sounded immediately and 2 ski patrollers arrived quickly with transceivers and a RECCO detector. The search area was relatively small (25 x 20m) and one rescuer quickly got a signal with the RECCO detector. This victim was uncovered from a 40cm burial after only a 12-minute burial. The victim was unconscious, but breathing, and had suffered a significant head injury. The mountain rescue team and emergency doctors arrived and treated the patient before he was flown to a Grenoble hospital. The patient was not equipped with a reflector, but was found by a weak signal that likely came from a cell phone. When the RECCO operator did not detect a signal during the first pass, he started to search in microstrips (few meters wide) with the detector just above the snow surface. Reported by Frederic Gros, Orelle Ski Patrol and Recco operator