As a young Highland lad in the very early 70’s climbers were still seen as something of a mystery by Glencoe locals. Ian & Nicky Clough were my neighbours in the village and I used to be encouraged by them.  I remember sitting in the front room of  "Tigh Dearg" watching a slide show by Tom Patey through a grey haze of smoke,smoking "Gauloise"being a major secondary pastime to beer and mountains. I found these folk scary as I wanted to climb in the mountains but the pictures of faraway places made me quite scared that I wouldn't live long unless I sharpened up. Sadly three of the folk in that room had all been killed in the mountains within two years.  Ian Clough by a serac on Annapurna, Tom Patey on "Am Buachaille" in an abseil accident, and Dave Knowles on the Eiger during filming for "The Eiger Sanction". This had a profound affect on me as a young lad as it coincided with my own early misadventures and scrapes and the first fatal accidents I helped at in spring 1972. My personal conclusion being that getting fitter and stronger and more technically able let me be a leader and decision maker rather than blind follower giving me at least some control over my destiny.  One of the very few folk who I have ever trusted absolutely with my own life and that of others was Hamish during a technical ResQ. His knowledge of the individual rescuers strengths and weakness's kept the right folk in the right place at the right time and put safety at the front of the agenda. 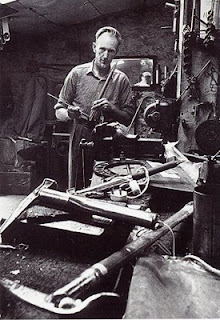 Hamish in the workshop at Allt na righ
Without Hamish, Glencoe Mountain Rescue Team would have taken many more years to form and become the extremely well organized and trained rescue service it is to this day, saving many lives through Hamish’s technical and medical initiatives. To this day he has a keen interest and maintains the team’s stretchers with the new MacInnes Mk 7 the mainstay of Scottish rescue evacuation. My climbing role models at that time were either in the rescue team, or working for Glencoe School of Winter Mountaineering as instructors. As a young sixteen year old mad keen on climbing, Hamish took me and another local lad Ronnie Rodgers under his wing. As the youngest, as long as I tagged along on rescues not getting in the way and helping a bit, then odd bits of gear would arrive from “Fishers of Keswick”(pre Nevisport) or Typhoo’s (Tiso’s), ordered for me by Hamish to encourage me for my labours. Emulating these masters was anything but safe, as copying Nicholson’s soloing was fraught with risk and I did end up needing rescued with friends myself from a frozen North Face of Aonach Dubh in winter at sixteen. With me at the end of an abseil rope that hung in space and was frozen. Hamish and Walter Elliot led the rescue and got us to safety. Hamish always had a word of caution or advice for us local lads and despite needing rescued because of inexperience, it was, and is not his nature to pass judgment. 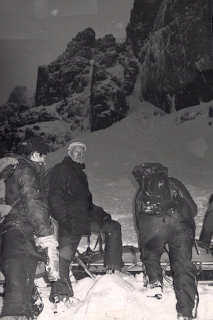 Rescue Twisting Gully 1979
Someone told me one time that I should “carry a camera - as one day it will carry you”. Good advice that took me many years to action. If I had a camera in my early climbing and rescue years, one picture I wish I had taken was that of Hamish in Glen Etive beside an abandoned min-van. We had gallon cans of beans in our old WW2 rescue truck as sustenance, and lacking a plate and spoon there he was sitting on a rock beside the river with his iconic cap on, eating cold beans out of a mini headlight glass with a big dirty channel peg. That image will always stay locked into my brain as the epitome of a hard man climber picture. Yet behind that picture is a gentleman. Another picture I would love to have taken was in his house with a gathering of many very well known climbers, with Hamish dishing out his potent Birch Bark home made wine from gallon flagons. The later devastation flopped around the room paralyzed from too much intake, some adorned with African masks and other things on the nether parts from his expeditions would have been hilarious. Hamish is a tough customer. Cold doesn’t seem to bother him and he has always been immensely strong. This strength at the end of an axe has produced many classic winter routes, not least of which are Agags and Ravens with a youthful Bonnington. I meet Hamish often, out for his daily walk or in the local coffee shop for a daily tea and scone. If the picture of him eating beans out a headlight will also be locked into my minds eye forever, so will be the esteem shown to him from all the greats in world mountaineering. Sitting chewing the fat for a few hours about fishing, films and mountains with Hamish, Yvon Chounard, Cubby and Jimmy Marshal last year I remember as so typical of Hamish’s broad range of interests and friends, and a man unique in his contribution to world mountaineering and mountain rescue. 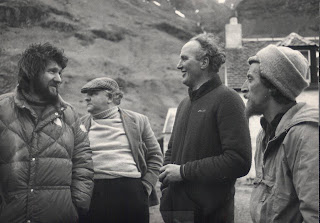 Left to right 1975.  Wull Thompson - Willie Elliot - Sandy Whellans - Jeff Arkless
Post Script:
Sadly Willie who you see in the picture above has passed away.  Sandy had a big input into MR in the late 60's and 70's a fact often overlooked in MR history. Willie Elliot was unique in his intimate knowledge of Glencoe and was an able mountain man when I was a lad. At 16 he took me to Dalmally show to help with a Tup he was selling.  Courtesy of a famous grouse I was deposited home paralytic that evening.  On a more serious note I will not forget the evening he phoned me to say he thought he saw a "wee light" opposite the house in the "Y" gully, did I feel like a donder up to see if it was anything before he called out the team.  Sure enough up high I found a wee lad of 12 years with both lower legs broken who had slid down a few hundred feet and over a pitch on the hard neve.  The lad told me what had happened and how his dad had told him what to do if there was ever an accident when they were out.  He had got himself into a bag and put on warm clothes and flashed his torch 6 times a minute at the road as he had been told to do. The lad asked me to go up and see if his dad was ok.  Sadly I found him above, but he was dead. After the team had arrived and the ResQ was over I told Willie about the wee lad and what he had done, and how if he hadn't been having a look the lad would have died from his injuries and the cold.  I later found out that the family were from Taynult. Years later I heard from the mother who told me of the lovely letter she had received from a Willie Elliot of Glencoe MRT after the accident telling her of the bravery of her son, who despite his pain and injury had done his dad proud. She told me of how much comfort it gave her and her family after their loss.  Willie saved many lives with his sharp eye and the deer stalkers "glass". He also was a caring person. The World is a lesser place without these gentlemen of the hills with unassuming wisdom and a caring nature.
at Wednesday, August 18, 2010