N. Argyyl and Lochaber is fortunate to have many sports available, not just world class mountain biking.  Sea Kyaking is a blossoming sport with activity providers in Oban and Fort William making a living from the wild coastline and abundant natural world in this rich environment. 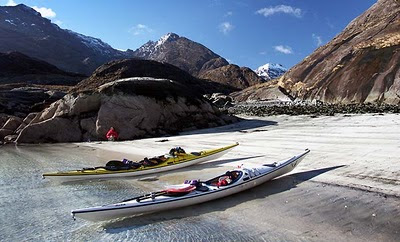 Fishing is also a popular pastime. From stocked ponds for overfed Rainbow Trout for the less adventurous, to omega rich Mackerel from sea loch piers and wild Brownies in remote hill lochs, every one worth it's weight ounce for pound against pellet fed stocked fish. We are also lucky to have the king of fish - salmo salar, the leaper. Seen as an exclusive "toffs" fish on expensive rivers elsewhere, here we are lucky to have fishing available on some of the areas smaller rivers.  The Orchy is one of my favourites with it's peaty dark pools when autumn colour is in the birches. The little Grilse rivers are exciting when a tussle beside steep rocky and slippy pools can be as dangerous as any other extreme sport.
We can't just take though, and "catch and release" is a must when possible. It's quite difficult sometimes though, and the picture below was just such a case when the Salmon was so tired it couldn't swim away so my son got to keep it. I was 15 mins up to my waist in the current trying to release it.  Earlier I had released my catch of that day, a lovely Sea Trout of over 3lbs. My sons 12lb fish was caught in a deep gorge and was landed some 100m downstream after a major tussle with scrambling over rocky ground and traverses and climbing involved - and much excitement!  We had a conversation about having to take this one which he really wanted to return. Out of respect for this king of fish. Like the north American Indians, my conclusion was we that we would honour it by eating it. 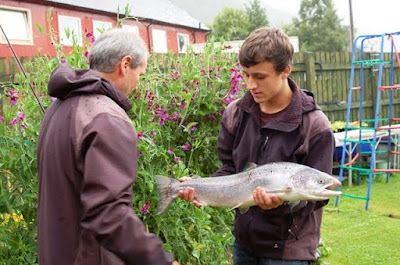 Fishing is available and the best point of contact locally is the Rod & Gun Shop Fort William
at Saturday, July 31, 2010