Alastair MacLennan MTB Ride Guide & World Masters Champ Enjoying a Glencoe Woody Trail
Great to see the trails coming on at Glencoe Mountain.There is definitely a need for more formal trail development in South Lochaber. Forest Enterprise are pulling back from the trail centre concept due to litigation issues so it leaves private developments such as Drumlanrig and Glencoe Mountain to take up the reigns and take the trail centre concept forward with continuing development. At the lower end of the Glen we continue to develop the trails marked out by Pete Laing that Forest Enterprise pulled out of.  Our customers are enjoying the many K's of wood single track.  This on it's own isn't enough to make South Lochaber a destination. But, if you include Kinlochleven's hardcore downhill, and rocky reds, and now the Duror trails, along with the Appin routes such as Sallachan, The Jacobite trail Glen Creran, Glen Ure, and the Barcaldine tracks, we have an extensive trail networks. My customers are spreading the word that this ranges from family friendly days out to gnarly road accessible black downhill at Benn Lora or Bonawe.  I am really pleased to promote MTB Ride Guide Fort William who can show you what  the area has to offer.  In fact I would go as far as to say that there is a more extensive range of all abilities cross country in South Lochaber and North Argyll now, than in North Lochaber, but it's largely under the radar.
On that; It's quite staggering really that the more family friendly trail concept has not been taken up by the Outdoor Capital. Having lost the World XC to the North of England, it only leaves the area as a World class downhill destination now although nothing wrong with that, and the state of the Leanachan XC trails, while great for us locals who know the area they are a nightmare for visitors and in poor repair.  For every one downhiller though there is 5 XC trail riders. The old "Witches Trails" are now disappearing under fallen timber, logging debris and misuse. If the North want to be an Outdoor Capital on the back of mountain biking as part of that concept then it needs more investment and better trails and up keep at the moderate end of the scale. Until then it's going to be good for us in South Lochaber to keep the momentum going as a good biking family friendly area, both on and off road, and to support the likes of Glencoe Mountain and local self build initiatives that can provide a hub and focus for the future. 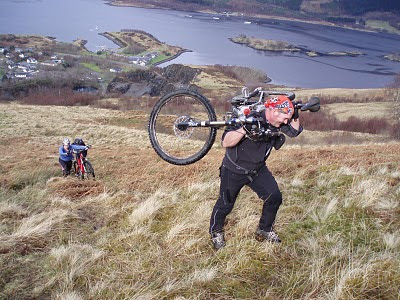 Ian MacConnell pre Morzine accident carrying up Meall Mhor. It's now possible to ride to the top and the sweetest 5km Red "Wallow Wood" with "eyores bridge" crossing awaits you.  Ian has  had a rough time of late after a nasty fracture to the upper arm kept him off the bike for over a year. He will be back as a "Roadie" soon though.
at Monday, July 26, 2010