A workout I often have athletes do is a combination of intervals followed by a steady-state tempo. What happens on the steady state tempo says a lot about the athlete’s aerobic fitness.

Here you see a run chart and a bike chart from a single duathlete. The charts are from WKO+ software. He did the run workout first and then the same day did the bike session. Each session involved a warm–up, intervals (pink stripes), a recovery following the intervals, a steady-state tempo (green stripe), and a cool down. Heart rate is the red lines on both charts. Run speed is the blue line. The back line is bike power. This athlete has greater experience as a cyclist than as a runner and his bike fitness tends to exceed his run fitness. This also shows up in his approach to each session.

RUN
In this chart (click to expand) he was doing 800m intervals on a track at just a bit slower than his 5k but faster than 10k pace. After each interval he did a 200m jog to recover. Each recovery was just slightly shorter in duration than the preceding work interval. Notice how he started each 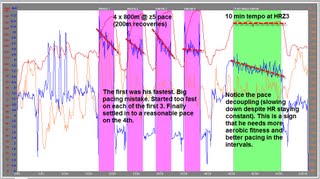 work interval at the fastest pace of the interval and gradually slowed down with the exception of the last where he finally settled in to a good pace initially. And he gradually got slower on each subsequent interval with the exception of the third which was his second fastest (but had the greatest pacing variability). I believe this positive-split pacing (start fast, finish slow both within and between intervals) is, in part, reflective of his more limited experience as a runner.

I was also very interested in his 10-minute, heart rate zone 3 tempo run following the intervals. Besides making for a great workout, I do this to see how aerobically fit the athlete is. Near the end of a challenging workout finding how speed responds when heart rate stays constant is a good indicator of the athlete’s aerobic fitness. Here you can see that speed drops off. Heart rate and pace ‘decoupled.’ They are not parallel. He has more work to be done on aerobic fitness yet which is all the more reason to be very cautious with pacing early in a race. Going out too fast will cause a significant drop in speed later in the race. If his aerobic fitness was higher, pacing would not be quite as much of a problem.

BIKE
Here you see his bike workout with 5-minute intervals done at power zone 4 which is roughly 40km time trial power for him. Th 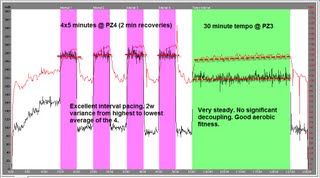 e recovery intervals were short at about two minutes each. Notice how beautifully he paced the intervals. They are steady and consistent. As a coach, this is so beautiful it brings tears to me eyes. :)

Then notice how steady his 30-minute, power zone 3 tempo was. The two lines (heart rate and power) remain nicely 'coupled,' just like railroad tracks. His aerobic fitness on the bike exceeds his run aerobic fitness.

It’s apparent we still need to work on two things: run pacing and run aerobic fitness. He has made great gains as a runner. Had he done this same run workout a few weeks ago the decoupling would have been much more evident. And his running race times at 5km indicate that he is, indeed, making great progress. Stellar run performance takes a long time to achieve, as in years, but his progress has actually been quite exceptional due to his determination and discipline.