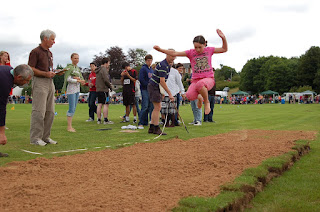 Did the Bridge of Orchy, Dalmally, Connel to Glencoe loop yesterday. 85 miles and 2,850 ascent burning 3,000kcal. Stopped by a white van man in Glen Orchy and shouted at to go back to the passing place 30m behind me as it was on my side. I went passed him with a meter to spare and told him he was a wanker. I stopped at Taynuilt Highland Games to watch Rebekah my daughter compete in the athletics and low and behold two top cyclists competing. Nic Charlton NACC in running mode, and also an Alberto Contador (ok not really!) look-alike in womens hose and skirt doing the long jump. Seems there was a contigent from Spain on an exchange. Also some big NFL guys accross from the USA taking part and filming the heavy events for TV. Oban MRT had a really good stand and had some great food on offer including strawberries and crepes. Nice bunch of folk with great support from friends and family making their spot the place to get your grub and try some funny games. Also tied up with Gavin Blaney and David Robinson and met their new arrivals and partners, so it was really nice and social, even if my legs were lactic laden.
Contador Long Jumping?
Click to Enlarge 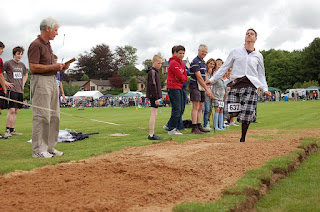 The cycle ride felt hard as the road surface wasn't good down to Dalmally and the council have put anti slip ruts along to Taynuilt. Bruised arse and almost bonked. I was a bit under the weather with a head cold last week so maybe such a long run wasn't wise On a positive note my Vo2 last week was 56ml/kg/min, down from 57ml/kg/min 3 weeks ago, but maybe as the TT's are finished this is why. Still reasonable for a 52 yr old though I suppose. Reversing it on my coaching programme for age adjustment and times from when I was in my 20's when I was up in the 75 ml/kg/min the chart gives me the same V02 as Greg Lemond at the TdF. Nothing like Armstrong or Indurain who had 85 ml/kg/min so I might have made a good domestique but not a GC. It's still a little above average and makes me reflect back to times when I would maybe solo 4 winter routes in a morning then go on an afternoon rescue, then be out again all night on a rescue. I once did approx 18,000ft ascent in 24 hours. I could never figure out why others were falling to pieces on the hill and needing to "do base" or coming up with excuses such as having cycled once round Loch Leven earlier. Maybe I just had a good V02 from running and biking as well as climbing at a high level. No way round it though, the long bike rides at tempo are very hard indeed, and it's really hard to keep enough food on board to keep the engine going. Based on todays knackerdness I am less sure about the Merida and Bealch Mor in good times and will need to aim for 6hrs+ not minus.