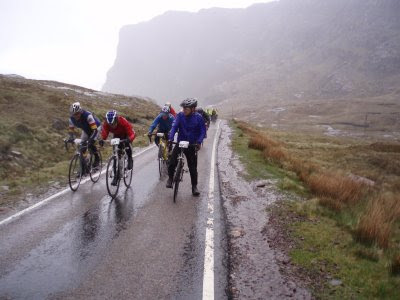 Some folk struggling up the hill below the sleet line 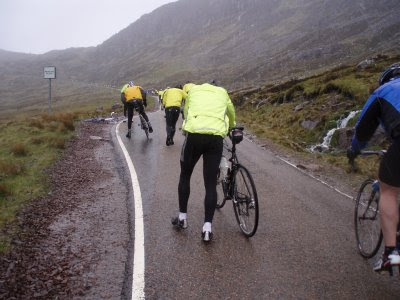 Looking up to the col with the top past the "Skye" line. Folk walking and an abandoned bike 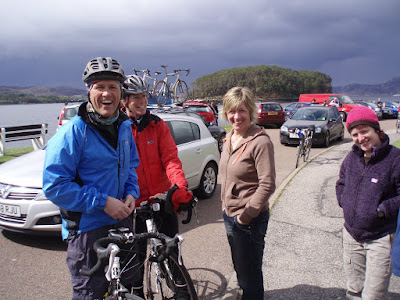 Nix, Foss, Fiona & Colleen. Foss having done a bit of CPR on the ill rider until the ambulance arrived. And it worked !

Beag in gaelic means small or wee. Not much wee on the Bealach Beag Sportif, which is really another name for a race. It’s a fair drive to StrathCarron where we were going to camp. Thankfully we did B&B in a last minute booking with someone who felt sorry for us. Snow, hail and gaels (who’s name is Mary) took us in and gave us a bed – full of grace this Mary but a real chatterbox. There was also the windy kind at storm force 5/6. Mary the landlady? She hates Skye folk she tells us, but listens to radio Portree via a Broadband connection and could talk the hind legs of a donkey. She must have been a “skianach” herself! The double bed in our box room was “Queen” size but the duvet was a princess, meaning 50% of the night I was warm and 50% Fiona - depending on who rolled over. Mary who obviously worked for the Portree branch of MI5 kept us up late finding out if we were Argyll Al Queda, and combined with the duvet meant that apart from a bit of water boarding we were not only well interrogated but strung out and tired before the ride.

Off we popped to Sheildaig to the start. What a bonny place. I first went there as a climber back in 1973. At that time Wull T and John Hardy ran the Glencoe School of Winter Mountaineering from Loch Carron. Never thought I would just be a biker and non MR person, but re visiting confirms my MR time has passed as Wull & John were good blokes when your back was to the wall. Nice to meet the Torridon MR lads who were providing first aid cover. In particular Seamus MacNally.

Anyway back to the event. The weather was shite and the first 12 miles gale, hail and rain with a headwind until Tornapress and the turn off over to Appelcross and more headwind uphill. You couldn’t see the top 6 miles distant for mist, and even below the mist it was obvious we were in for sleet or snow at the top. For those in the know Liddesdale is the local hill to train on. The Bealach Beag is steeper and longer in distance and for me only just doable in a compact at 34/26. Maybe x 5 Liddesdale - and steeper. Quite a few folk walked a fair bit apparently. The descent to Appelcross is dangerous and maybe accounts for why for the first time on a race, for me at least, we had to fill in next of kin details. Long steep 8% to 13% stretches with hairpins to catch out tired and cold brake hands. I lost lots of time on this as I was too scared despite being in the front group to the top. Too dangerous for a guy who’s had a back injury 25 years ago and a neck injury 3, that’s my excuse. Locals were out in force and it was a bit TdF like getting cheered on through Appelcross and beyond. For folk who got to this point it was easy to think it was all over bar the shouting as there was a tail wind and fast good road. Lots of roadie tactics and I got suckered at the lead for a long while until I jumped.

The next 20 miles are the hardest of the race. Numerous 10 to 12% steep hills out off the saddle on the lowest gears and only just doable, followed by fast descents to carry you onto the next big up. This side was drier and what a stunning piece of coastline if your not too busy breathing out your arse to look. By this time knees are hammered – really hammered, and pre race fluid choices made some difference. I had an electrolyte/carb on my first bottle, but by this time I had a suck on the high caffeine/carb on bottle two. Very quickly I was strong again and felt good. Meanwhile not too far behind, Fiona was having a good ride and was going great and almost at the front of the Lochaber ladies - and she stopped to take loads of pictures (mad!) 3 of which I have posted. Colleen is strong and fast and Fiona couldn’t catch her or Nix. Nor could I catch Andrew who flew past me on the descent into Appelcross. I definitely lack fibre in the downhill.

Fiona & Colleen both witnessed a next of kin situation with a rider getting CPR after exploding from a medical rather than fall event. Need to find out if he survived. There have been many serious injuries on this ride but the marshals did a good job of warning us when possible.

There was no let up in hills till the very end back at Sheildaig. Truly buggered legs and 2hr 56m for me, and Fiona came in at 3hr.30m a very good time indeed. Would I do it again? Emphatically yes, but with a 5* B&B and King Size bed armed with knowledge of the route, and having worked on the mental as well as physical strength to maybe improve on this years times. Sunshine would help …………